Project Group 2000 is a full –service, general contractor for wireless infrastructure, installations, and deployment of advanced wireless technologies. The company was created in 1995, soon after the federal government began auctioning off Broadband Personal Communications Service (PCS) licenses to be utilized for mobile and data services, including cell phones, text messaging, and the Internet.

“We were all former technical managers within the wireless industry,” says Project Group 2000’s President, Scott Shambaugh, referring to himself the company’s two other founding partners. “We realized there was going to be tremendous growth in the cellular industry and there was a necessity for quality contractors to assist in managing and building all of this wireless infrastructure. So that’s what we did.”

Today, Project Group 2000 has about 50 employees who work out of three locations in its three major markets: Nashville, St. Louis, and Kansas City. “We have operating, office, and warehouse facilities in each of those three cities,” Shambaugh says, “and we cover about a 350-mile radius of each of them – which is a pretty large territory, covering a lot of the southeast and Midwest. We’re one of those grassroots tower services companies that goes into the field to all of these thousands of different tower sites, and upgrades the carriers’ equipment to new technologies. We do many other services, as well, but that’s the bulk of what we’re doing, currently – what is known as overlays or upgrades. We have master service agreements with the carriers and we work directly for them, and then we also do work for what they call ‘turfing vendors’ that they may hire to do big, geographical upgrades, and we’ll work for those turfing vendors on big projects. So, it’s a combination of working directly for the carriers and the turfing vendors.”

Shambaugh adds that while the company’s actual clients are the large cell phone networks, the towers on which Project Group 2000 crews work, are generally not owned by them, but rather by a handful of large, publicly-traded conglomerates. “It’s basically large, high-tech, vertical real estate,” he quips. “Like an apartment complex or a big business high-rise that rents suites for businesses. They own towers and they lease space on those towers to the carriers.”

Even in the specialty contractor niche that Project Group 2000 occupies, Shambaugh reveals that there is a substantial amount of competition in the sector. So, separating itself from the pack is key to obtaining new contracts and maintaining current ones. “We like to differentiate ourself from the competition in a number of different ways,” he avers. “One of them is that we really champion safety as the ultimate priority when performing this work. Everybody in this industry knows how dangerous it is and they want to work with a company that takes safety very seriously and prioritizes it correctly in its operations. So that’s one way we differentiate ourself.

“Another way is that we’re implementing the most modern business software modeling available to create work architecture – the execution of the work – in a manner that allows us be more efficient in providing high-quality service and craftsmanship at the site so that our customers will acknowledge and recognize and, going forward, provide us more business.”

In addition to its high levels of performance, Shambaugh says the company also leans heavily on its years of experience and many contacts within the industry for maintaining its portfolio of repeat business. “But, at the same time, we have a very aggressive procedure to make new contacts,” he states, before describing a particular challenge to the firm’s marketing schema: “One of the big issues in our industry is that people move around so much. You have people moving from position to position within either the turfing companies or the carriers. And that can affect your business.”

“You have relationships with companies, but typically, there’s a point of contact,” he elaborates. “That point of contact may favor you as a contractor and then, they may move along and that may or may not be good for you in your business with them. So, we have to stay very close to the customer; we make a serious effort to get in front of them, rather than just a phone call or an email. We want to get face-to-face with them. And we’re always searching for new opportunities to bring our experience and our track record of craftsmanship and quality and safety to either new companies that are in the business, or existing companies that we may not be doing work for in a certain region or area and we want to expand our services into that region or area. So, it’s up to us to get our name out there and get in front of the customers and stay in tune with them.”

Another challenge, albeit, also an opportunity, for companies such as Project Group 2000, is the rapid evolution of cellular technology that initiates the need for new infrastructure strategies and methodologies. One such new technology is known as small cell. “If you envision a tower, it covers a very large area,” Shambaugh posits. “Small cell covers a much smaller area. And the equipment and infrastructure is not deployed on a conventional tower; it gets deployed on much smaller structures like light poles, power poles, and street signs. There are a lot of very small areas that have a lot of traffic and the carriers want to increase the signal level and their call handling capacity. And they’re doing that with small cell. It’s known as ‘densification.’”

Another new technology that is going to make its debut next year is 5G. “The fifth generation of cellular service,” says Shambaugh. “4G came in around 2011 and is currently still being deployed. It’s about a five year run, now, on these technologies. 3G was probably more like a seven or eight year run.”

Regarding its own next five years, Shambaugh beleives that Project Group 2000’s growth will necessarily be tied to the carriers’ visions and the deployment of their networks. “We want to march in step with the carriers and their needs for outside facilities – which could be a tower site or a small cell on an electric pole,” he says. “We want to be one of the prime contractors in any of those technologies that they need and want to deploy and/or upgrade. At the same time, we want to do that in more markets – growing our business and expanding our footprint and service area.”

Tom Cameron is Project Group 2000’s CEO. He joined the company as a majority, equity partner in 2014, bringing with him years of experience in growing a service-type business. One of his goals, in addition to the processes described by Shambaugh, is expanding the company by acquisition. “First, grow as much as we can, organically, which is sometimes difficult because of the labor force you’re looking for. So, we’re also looking for some acquisition opportunities over the next five years.”

Cameron believes that the costs of doing business, such as the amount of money that’s put into the necessary certifications (Project Group 2000 has thirteen of them); the high cost of insurances (Project Group 2000 carries general liability, auto, workers’ compensation, professional liability, and environmental policies, plus special riders for particular jobs and projects); and the expenses for training and compensating highly skilled workers in a dangerous profession; all make it difficult for smaller firms to remain profitable. “It’s hard for the small guy,” he says. “To exist in the industry, you’ve got to be part of a bigger team. So, we’re going to be fairly aggressive in the next five years, looking for, maybe five to ten times growth opportunities. That’s our strategy moving forward.”

As Project Group 2000 embarks on its third decade, meeting new challenges and conquering new markets, both Shambaugh and Cameron continue to stress their company’s commitment to safety, integrity, and, perhaps most of all, to craftsmanship in an industry that demands all three. “Those three things, for any of our customers, are very critical,” Shambaugh declares. “Safety – any new customer that we may come in contact with, if they’re good at vetting contractors, their very first question, and right out of the box is, ‘What kind of safety programs do you have?’ Integrity – they need to know that the company they’re dealing with has good communication throughout the organization, from the top, down to the field people that they deal with on a daily basis. And craftsmanship – the fact that these sites and these projects are executed to the technical and mechanical standards that they have to meet to make sure that these networks perform up to their specifications.”

WHAT: A full-service telecommunications engineering and construction company

Quality Background Screening – With access to billions of records through hundreds of thousands of databases in 50 states and 200 countries, Quality Background Screening provides customized, computerized background search packages that are fast, accurate, discreet, and cost effective. These searches can even be performed on the company’s state-of-the-art web search interface, when an employer needs the results quickly. – www.qualitybackgroundscreening.com 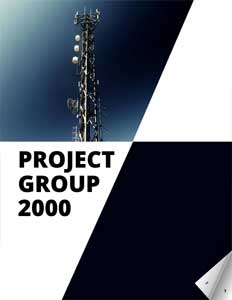