October 2016Past IssuesSupply Chain and Logistics

The Orange County Convention Center – The center of hospitality

Miebach Consulting was founded by Dr. Joachim Miebach in Frankfurt, Germany, in 1973. Today, the company is an internationally recognized leader in the field of logistics, supply chain consulting, and engineering services. It clients include hundreds of large and medium-sized companies in such sectors as:  Aftermarket and Spare Parts, Automotive, Chemical, Consumer Goods, Fashion and Apparel, Manufacturing and High-Tech, Pharmaceutical and Medical Devices, Logistic Services Providers, and Retail.

Nick Banich is a Partner and the Business Development Manager for Miebach Consulting in the USA and Canada. He explains that Dr. Miebach, who had studied industrial engineering at Berlin Technical University and the University of Edinburgh, began his company’s successful journey when, at the outset, he endeavored to exploit what he recognized as a significant but missing piece in the services of the traditional management consulting houses of the time.

“Back then, you had the management houses that were overstretching themselves, trying to get more tactical and getting into the operations space,” Banich explains. “They were kind of over-reaching and they weren’t able to serve their clients. So, Dr. Miebach saw that there was a gap between supply chain strategy consulting and tactical engineering. And he saw an opportunity to found what he coined ‘supply chain engineering’ – bringing a good, tactical, engineering approach to supply chain problems.”

“On the other side of the coin,” Banich continues, “you had suppliers that were very much interested in selling their equipment. There’s always a concern if you bring suppliers in to do consulting; they may be self-interested in having their consulting solutions end up with you buying their equipment, or software, or whatever it might be.” Thus, Miebach Consulting was determined to be independent and non-biased. “We do not have a division or sister company or joint venture with any firm that sells equipment, hardware, software, anything along those lines,” Banich avers. “So, when our firm deploys to support you on an engagement, we’re designing it based solely upon your needs.”

From the beginning, Miebach was also an innovator in the field, keeping in close touch with the suppliers who were designing and developing and bringing to market the new products and systems that the company would then incorporate into its engineered, supply chain solutions. “We wanted to be focused and by being focused, it allowed us to also be on the cutting edge of that field,” Banich says. “For example, in 1973, we worked on a project for a client in Hamburg, Germany, which was the first introduction of barcode technology in a distribution center environment. We designed one of the first automated, storage and retrieval system warehouses in Germany, in 1975. We had our first robotics project in 1983 in a warehouse.”

The company started expanding its operations in 1982, when it opened an office in Barcelona, Spain. “In 1994, we moved into the Americas with the opening of our office in Buenos Aires, Argentina,” reports Banich. “The mid-90s was a rapid expansion time for us – we had our first project in Asia in 1995 and in 1996, we opened our operations in the United States. At this point, we have 22 offices spread across the world: Latin America, where we have offices in Argentina, Brazil, Colombia, Chile, Peru, and Guatemala; in North America, we have offices in Mexico, the United States, and Canada; of course we have the offices in Germany, but also in Spain, the United Kingdom, Belgium, Switzerland, Poland, and Italy. In the Middle East, we’ve opened offices in Saudi Arabia and Dubai; in Asia, we have offices in China and India. So, when you look at the market, and look at the supply chain, niche-focused firms, there are a lot of us out there now. However, we’re really the only one that has a true, global umbrella.”

Banich believes that it’s this focus on its local offices that best positions the company to service local and regional companies, as well as large, multi-national firms that have branches in many countries. “We feel we have a unique service proposition to Fortune 500 and 1000 companies because you can have the same focused, supply-chain partner that has local experts and in all the countries that you’re operating in,” he states. “You’re not parachuting in consultants from the United States or Germany into Argentina, into Chile, into the Middle East, into Asia. We’re able to have a team that’s there at the headquarters that understands and can support the strategy and what the headquarters is doing, but also bring our local teams from the local market that can work with their local teams to find the right fit between the global strategic framework and the local needs and nuances. So, our team can match their team structure.”

Those business relationships with multi-national firms have been a primary engine of Miebach’s expansion over the years, as the company often grew alongside its clients’ needs. “Very often, we have such strong relationships with our clients that they said: ‘We’re getting ready to have a large expansion into Brazil or Argentina. We respect the relationship; we understand the quality you deliver, so will you guys go with us on this expansion?’ And that’s really how the company expanded – with our clients. And that speaks highly of the work that we deliver.”

Regarding that high quality of work, Banich says that as new technologies emerge that act as “disrupters” of the status quo, Miebach Consulting is ideally suited to help it client companies deal with them. “A big disrupter that companies are still trying to figure out is with the whole e-commerce and omni-channel play,” he reports. “And that’s an area where we’re doing quite a bit of work with firms who say: ‘What does this really mean from a tactical, supply perspective?’ What does my distribution strategy need to be to meet the customer demand, and to align with the customer experience?’ What does that mean for my facility?’ What does that mean for my transportation?’ What does that mean for my inventory?’ What does that mean for the structure of the supply chain?’ What does that mean for how my supply chain is organized?’ Companies that have always been a manufacturer that have sold to a distributor who sold to a retailer are asking themselves: ‘If we want more control of our brand, does it make more sense to go directly to the consumers?’ So, we’re having a lot of interesting conversations with companies trying to react to the internet and e-commerce shopping. That’s a space where everyone is still trying to figure it out – the retailers, themselves, some have figured it out to this point – but who knows about tomorrow with disrupters that are continually evolving?”

Banich also believes that automation, as a whole, will keep on entering markets where it traditionally has been absent. “Looking at North America, specifically: North America’s at a point where the barriers to automation are falling and automation is becoming more and more prevalent in manufacturing and distribution markets,” he says. “Robotics is something that will continue to grow. I also think you’re going to see greater strides in the fields of supply chain visibility, increased development and advancement of control towers, and the use of predictive analytics.” In addition, Banich surmises that labor availability and the desire of people to work in a distribution or manufacturing environment is falling in many places. “So you’re going to have to do something with the fact that there are labor shortages, that goes back to my original comment about the automation plays in this space,” he adds.

A labor shortage is not something that Miebach Consulting need worry about. “Worldwide, we’re just over 350 employees,” says Banich. “That is small when you compare us to the global strategy firms, but look at the volume of projects that the group has – well over a thousand a year. It’s a significant portfolio.” The company draws is employees from the top business, engineering and technical schools globally, as well as from the industrial sector. “We’re also bringing in people from other consulting firms to ensure we’re getting other perspectives on how others are approaching the problems that companies are facing, today. So, we really try to pull from everywhere. The important piece to us is to find people who are going to be extremely hard-working, extremely dedicated to the client, and extremely loyal to the work and their fellow teammates. We see the people that we’re bringing in the door today, as the directors and partners of tomorrow.”

Banich explains that the company has a lot of industrial and mechanical engineers onboard, because “not only do we help on the strategic piece, but we very, very much get in the weeds,” he says. “When we talk about developing an automation strategy, we’re not only saying, ‘What geographies and what type of operations does it make sense to potentially automate?, but we’re there, writing the specifications; we’re there onsite as the cranes are going up and the concrete’s being poured; we’re there through the testing and the whole thing. We’re really trying to be a good, responsible advocate for our client – from design, through strategy, through go-live.”

Finally, Banich believes that even in the in the vast international marketplace in which it provides its highly engineered, complex, and innovative supply chain solutions, it ultimately comes down to people working with other people to solve problems. “Our people are our secret weapon, if you will,” he reveals. “We have no false illusions of grandeur about what we offer. There is no magic formula that we have. We understand how important our clients and our people are because at the end of the day, it’s really the dedication and commitment of our people to our customers. Without having both of those, our firm would cease to exist.”

WHO: Miebach Consulting Inc.
WHAT: An internationally recognized leader in the field of logistics, supply chain consulting, and engineering services
WHERE: : US Headquarters in Indianapolis, Indiana
WEBSITE: www.miebach.com

The Orange County Convention Center – The center of hospitality 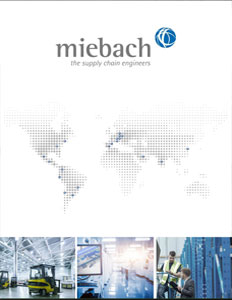