Because the shows must go on

The International Association of Exhibitions and Events (IAEE) had its beginnings in 1928, when a group of businessmen formed the National Association of Exposition Managers. “The reason they got together was to talk about how they can have better negotiating powers with the exhibition centers that they were doing business with,” says current IAEE President and CEO, David DuBois. “They also wanted to better understand best practices: ‘Hey, I’ve got this scenario; and how do you do this; and what about this?’ Today, it’s much more complex and more sophisticated,” he adds. “But the basic reason to exist continues to be sharing of knowledge, best practices, and success stories of each of these show organizers and suppliers who support the $70 billion industry in the United States.”

“We’ve gone through several name changes to be where we are today,” DuBois reports. Indeed, about 40 years ago, the original organization, the National Association of Exposition Managers – NAEM – became the International Association of Exposition Managers – IAEM, in order to expand beyond U.S. shores. It added the word “Events” to its name several years ago in order to represent the sector of the industry that produces non-traditional events done either at company offices or hotel ballrooms, but that are still considered trade shows.

Today, the renamed IAEE is the leading trade association for the global exhibition and event industry. “We’re in 51 countries, now,” DuBois says. “We have members in Japan, Taiwan, Malaysia, Singapore, China; we just launched an India chapter a few weeks ago. We have over 1,300 organizations, non-profit associations, and for-profit companies as members; and about 9,500 individuals make up the roster of those 1,300 entities.”

Over 50 percent of the IAEE’s members are directly involved in the planning, management, and production of exhibitions and buyer-seller events. The remaining members consist of those who provide products and services to the industry. About 80 percent of its membership is based in the U.S., which, according to DuBois, has the largest exhibition industry in the world, producing approximately 12,000 shows of 10,000 square feet and over, per year. China is in second place with 6,000 shows in 107 Chinese venues and Germany is in third place with an annual total of about 3,500 shows.

The IAEE, with a full-time, professional staff of 22, has been based in Dallas, Texas for the last 25 years, after the organization moved from its home in Ohio. The organization’s Strategic Plan has two Pillars: Advocacy and Education. Regarding Pillar One, DuBois says that advocacy is “promoting the value of face-to-face exhibitions and events as the primary marketing medium for business development and growth.” Regarding Pillar Two, he says it’s about “providing timely and relevant education to our members to help them be more successful. We do it through webinars; we do it through 65 to 80 workshops at our annual Expo! Expo! meeting every December; we do it through all of our content, and through our great website. We have our CEM (Certified in Exhibition Management) program in 28 countries. It is the highest designation one can achieve in our industry.”

Nicole Bowman is the IAEE’s Vice President of Marketing and Communications, responsible for keeping its far-flung membership informed. “A lot of the communications that we do is on the chapter level,” she explains. “We have 12 chapters around the world. It’s a multi-channel mix: emails, newsletters, social media. We rely on our chapters to communicate our values and initiatives and things we have going on at a local level.” In China, she reports that they even have WeChat and Weibo accounts – two Chinese platforms – so that they can better reach out to 800 individuals there who are IAEE-certified in exhibition management, but are not yet IAEE members.

DuBois adds that while most of the IAEE’s literature is in English, the Association just began a monthly newsletter in Mandarin. “We do have communications in Portuguese because of our Brazil and Portugal members,” he notes. “We do have communications in Spanish. And we’re looking at getting a grant from the Japanese government to do our certification program in Japanese.”
And, of course, in an industry that is actually defined by face-to-face exhibitions and events, what could be more natural than the IAEE hosting its own annual event in order to fulfill its mission of educating its own members? “We have Expo! Expo! – which is our brand for our annual meeting,” says DuBois. “We draw, on average, about 2,500 members and non-members from 20 countries. It’s always been in the U.S., but we’re exploring, in future years, the possibility of Expo! Expos! outside the U.S. – maybe a Middle Eastern Expo! Expo! Or an Asian Expo! Expo!”

In addition, each spring the IAEE sponsors a woman’s leadership forum – almost 60 percent of its members are women; and every August there’s another leadership conference for members looking for leadership training. “Our members want to see each other succeed,” says Bowman. “When they come to our events, they know that they are going to get education and experiences that they can immediately take back and apply in their workplace. They don’t just show up. We have high level, quality education and case studies. We really immerse the attendee in the experience. And that’s what really sets us apart. People want to pay to hear what we have to say. Our committees, our councils, our task forces are all made up of members who take the time to further the IAEE mission.”
DuBois says that the IAEE even has its own show at the Show of Shows, the giant exposition of historic arms and military collectibles sponsored by the Oho Valley Military Society. “We have about 280 companies each year – exhibition/convention center executives, technology companies, and official service contractors who stage these big, beautiful, wonderful, fantastic exhibitions that we all know and love.”

When DuBois says “all,” he isn’t exaggerating much, considering that 32.5 million Americans attend some kind of trade show or event, every year, pumping over $70 billion of direct and indirect funds into the nation’s economy. “Those are numbers that raise eyebrows,” says Bowman. And it’s those types of numbers that the IAEE likes to impart to members of the U.S. Congress, when it exercises its advocacy function as mandated by Pillar One.

“Three years ago, we started Exhibitions Day on Capitol Hill,” DuBois says. “This will be our third year, where we bring over a hundred of our members up to the Hill. We brief them for a couple of hours and then we make legislative calls all day long, getting to over a hundred Representatives, Senators, and/or their staffs, and we focus on issues that are important to us.” “It’s a great way to raise awareness of the industry,” Bowman adds. “When they’re out there voting on things or proposing legislation, they think back to the meeting that they had with our industry professionals, because we really are a huge economic force in local communities.”

DuBois elaborates upon the industry’s strong economic influence, noting that, historically, the exhibition and events industry trails just behind a country’s Gross Domestic Product (GDP). “If the economy is soft, attendance is soft, because people many not want to spend $50 for a ticket to a boat show or a garden show; they might need that extra hundred dollars for food that month, because the economy’s tough. So, we’re always trailing just behind GDP.”

That being said, DuBois goes on to state that, right now, both the industry and the GDP are in good shape.”We’re at 2 ½ to 3 percent growth,” he says. “By 2018, we will be at the highest level of volume of exhibition revenues and attendance in the history of our industry. So, we’re very healthy – predominantly in the United States; Europe’s a little softer, although Germany continues to be strong; Spain is coming back a little bit; Latin America is struggling because of Brazil; Mexico’s okay; Canada’s always steady; China’s doing well at 7 percent growth; India’s at 3 or 4 percent growth. So, overall, our industry’s very healthy and it’s all tied to GDP in countries around the world.”

Both DuBois and Bowman believe that the economic impact of the exhibitions and events industry cannot be over-emphasized. “Everybody goes to meetings,” says DuBois. “Everybody is involved, as an adult, in going to and attending, or walking through a trade show at some point in time, whether it’s a car show, a garden show, a jewelry show, a consumer electronics show – CES, every January in Vegas, has 150,000 people.”

And as long as these shows continue to draw such large and sustained crowds, worldwide, the International Association of Exhibitions and Events will persevere in its mission of providing its stakeholders in the global exhibitions and events industry with the information and resources that will help advance and promote their success, both here and abroad.
Because, after all, “the shows must go on.”

WHO: The International Association of Exhibitions and Events
WHAT: A worldwide trade association with 1,300 members
WHERE: : Headquarters in Dallas, Texas
WEBSITE: www.iaee.com 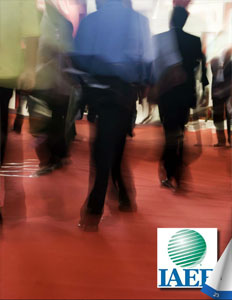