Sandy, Utah, a suburb of Salt Lake City, may be far away from the sun-drenched beaches of Hawaii, Mexico, and the Caribbean, yet the island lifestyle has always been on the mind, and in the heart, of Jeff Pedersen, President and CEO of two retail companies under the PW Companies banner: Del Sol and Cariloha. With more than 20 years of vacationing and working in and around the cruise ship ports of the Yucatan Peninsula, the Mexican Riviera, the Bahamas, and the Hawaiian Islands, Pedersen had become enamored with their cultures and steeped in their beachfront shopping experiences.

For many years, he owned and operated Del Sol, a retail clothing and accessories company, which was originally established in 1994, and today has over 150 stores in 26 different countries. “In Del Sol, everything changes color in the sun,” Pedersen explains. “You might have a T-shirt that says, St. Maarten, or St. Thomas, or Nassau, or the Bahamas on it, and when you go out in the sun, all the colors come out. It’s a type of organic, photochromic technology that we developed called Spectrachrome. Ultimately, we put it in clothing, nail polish, sunglasses, hair accessories and other items. We worked heavily with all the major cruise lines – Royal Caribbean, Carnival, Celebrity, Disney, and Norwegian – to build our business and, while doing so, we were averaging about $40 per transaction.”

Although the Del Sol Company was a profitable enterprise, Pedersen kept thinking about a way to increase the amount that an individual tourist might spend in his stores. “There’s got to be a scenario where Middle America could go into a store and buy products that were around $200 or $250,” he remembers wondering. “And, we felt that we really knew and understood that space of ‘take your vacation home with you.’ So, we created a business called Cariloha, where the ‘Style of the Caribbean meets the Spirit of Aloha.’ It’s a business that we had wanted to create for a number of years.”

“We opened three stores: in Cozumel, Mexico, in St. Thomas in the U.S. Virgin Islands, and in Ocho Rios, Jamaica,” Pedersen continues. “We bought all this product that we thought customers would love and branded it: Cariloha. I knew all the locations, and landlords, and all the marketing relationships on board the cruise ships. We set the business up; we sourced the products; filled up the warehouse; and started selling.” Unfortunately, the initial response was not encouraging. “We expected to do about $1,500 a cruise visit when a cruise came into port,” he says. “But we ended up doing 20 percent of projections – about $300 a visit, when we first opened. We knew we had a problem. So, we sent executives to these locations and essentially told them: ‘Don’t come home until you figure out what the customer wants and why the concept isn’t working.’”

Meanwhile, lightning was about to strike. Pedersen had gone to the Magic Apparel show in Las Vegas, the biggest apparel show in the world, and happened upon a swatch of fabric made from bamboo. While there, he learned that bamboo cloth was twice as soft as cotton, that it was 3 degrees cooler, that it was hypoallergenic, and that bamboo was one of the most sustainable resources on the planet, with some species growing up to four feet a day. “The next day, I got on a plane and flew to southern California and started working with one of our suppliers, where we made 5,000 shirts from luxuriously soft bamboo viscose,” he recounts. “We put them into the three locations, marketed them onboard the ships, and the 5,000 shirts sold out in two weeks.”

Pedersen knew then that they had created lightning in a bottle. “We ultimately liquidated all the products in the stores – all the sunglasses, and jewelry, and purses – and started creating products that people wanted – bed sheets, bath towels, fitness gear, socks and underwear – made from highly sustainable bamboo. And, it just took off. Sales went up seven times, eight times over where they were when we first started. We went from three stores to 55 stores in 14 countries. We’ve grown at a 70 percent compound annual growth rate over the last seven years.”

Pedersen is fanatical about the advantages of bamboo and has seen firsthand that his customers, once acquainted with his company’s bamboo products, tend to “join the bamboo nation,” as well. “Bamboo, as a fabric, has been around for a number of years,” he says, “but nobody has been able to put a picture frame around it and to create multiple products in multiple categories like we have. And, because we’ve introduced a variety of different products, we’re able to enhance each one of them according to trends, demand, and customer feedback. We’re continually innovating and coming out with new products. We just came out with a resort line of sheets that are second to none. If you have 600-thread-count, Egyptian cotton sheets, they don’t compare to our resort line of bed sheets that we’re now putting in the stores. People are willing to spend a little bit of money on something that’s softer than cotton and other luxury fabrics, odor resistant, and a better alternative for the environment.”

Today, Cariloha has about 600 employees and Del Sol, some 1,800. The privately owned PW Companies still owns and operates both brands. “We’ve never taken on an investor,” Pedersen states. “We’ve never given up equity. We’re competing head-to-head with all these fast-growing companies out there on the Inc. 500|5000 lists, and we’re doing it without outside capital. We’re reinvesting our earnings and continuing to grow organically.”

While the idea of franchising has been explored, Pedersen maintains that it’s more lucrative for the PW Companies to own its own stores, while also partnering with some independent outlets. “There’s a lot of margin in opening locations when you’re the manufacturer, and you own the entire supply chain all the way to selling the product,” he says. “We do have some partner stores that are independent operators. They can only sell our products and we can only sell to them in their exclusive territories. We just don’t take a franchise fee – it’s an independent operator agreement, as opposed to a franchise.”

What Cariloha does do, however, is sell its products online. Today, online sales comprise about 15 percent of the company’s business. But, Pedersen still believes that the experience of discovering his bamboo products in the company’s brick and mortar stores is what creates a Cariloha customer for life. “We invite them to touch and feel the ultra-soft bamboo fabric for themselves. Then, we show them the hard bamboo stalks – we hit them together and say, ‘We make this…out of this.’ It really sparks their interest. When they come home, that’s what they sleep in – pajamas or boxer briefs; they work out in the morning in our Bamboo Fit Line; they towel off after a shower in our bamboo towels; they sleep in the bamboo sheets. They love wearing our products – shorts, shirts, and socks – throughout the day. They embrace the ‘Cariloha lifestyle,’ a comfort-driven, eco-conscious way to live.  They become brand ambassadors because they love that daily experience. And, even if they don’t have a store, nearby, they can go online and buy more of what they want.”

Over the next several years, Pedersen says he would like to see Cariloha become “the gold standard for sustainable luxury in the world,” meaning that every bed will have Cariloha bamboo sheets on it; every bathroom will have bamboo towels in it; and every closet will become lined with Cariloha clothing. “We look to become a $300 million company by continuing to open stores in locations in top tourist destinations, but also in top metropolitan areas, throughout the world, while continuing to sell, online,” he declares.

Meanwhile, Cariloha is still the only multi-store retailer on the planet that’s completely filled with products made entirely from bamboo, a sustainable and renewable resource. “It’s a great product and a great brand,” says Pedersen. “And customers love it.”

WHAT: A chain of retail stores selling bamboo-based fabric products

WHERE: Headquarters in Sandy, Utah 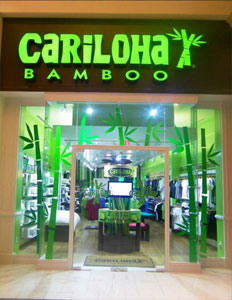