Dr. Thomas Preston Foster, the founder of the city’s first newspaper once called Duluth, Minnesota, a city of some 86,000 souls on the southwestern tip of Lake Superior: “The Zenith City of the Unsalted Seas.” Zenith means high point, and it’s true that many times in its long history, Duluth rose to prominence in its portion of the world. But it’s equally true that there were times when its fortunes were not so manifest. Such is life.

But each time the city’s economy declined and its population decreased proportionately, it managed to regain its footing by taking advantage of its natural and human resources and change with the times. In the earliest days of European expansion, the area was a Mecca for French beaver trappers. When the beaver became scarce, the next wave of settlers mined for copper and iron ore. And when the copper ran out, the area’s economic focus shifted to timber harvesting.

And of course there were the railroads and the shipping lanes. With the opening of the first canal at Sault St. Marie in 1855, Duluth became the only American port with access to both the Atlantic and Pacific Oceans. By the start of the 20th century, Duluth passed New York City and Chicago in gross tonnage handled, making it the leading port in the United States. Lake freighters carried iron ore from the Mesabi Range through the Great Lakes and on to processing plants in Illinois and Ohio.

Then there was steel and cement. The Duluth Works, established in 1915, was an industrial steel and cement manufacturing complex operated by the United States Steel Corporation. When first founded, it was one of the most modern steelworks in the world. For half a century its workers turned out nails, wires, wrenches, and automotive tools that were exported around the globe. With all the jobs available, Duluth’s population peaked at 106,000 in 1960 – another zenith. And then the decline began.

US Steel closed its Duluth Works plant in 1981 – about the same time the iron ore was running out and the economics of steel production were proving untenable due to lackluster demand and foreign competition. The steel plant’s closing forced the shuttering of the cement company, which depended on the steel plant for its slag – the stony waste matter separated from metals during the smelting or refining of ore that, when added to mortar, improves its strength and durability. More closures followed in other industries, including shipbuilding, and heavy machinery. By the decade’s end, the unemployment rate hit 15 percent.

With the decline of the city’s industrial core, the local economic focus shifted to tourism. The downtown area was renovated with new, red-brick streets, skywalks, and new retail shops. Old warehouses along the waterfront were converted into cafés, shops, restaurants, and hotels. The city’s population, which had been experiencing a steady decline since 1960, stabilized at around 85,000.

By the beginning of the 21st century, Duluth had, once again, put itself on a path to yet another zenith. That certainly is the view of Heather Rand, the city’s Director of Business and Economic Development. “We are a regional hub for medical, retail, higher education, and, certainly, we are a tourist destination,” she says, “in a territory that includes northeastern Minnesota, northwestern Wisconsin, and Canada, just north of us. A lot of our business development activity is focused around those industries.”

And yet, Rand explains how the city is ready to fly even higher – both literally and economically. “Another notable industry that many folks are not aware of is the aviation cluster in Duluth that’s quite sizable, with a very significant aircraft manufacturer called Cirrus,” she says. The Cirrus Aircraft Corporation was founded in 1984 in southern Wisconsin by brothers Alan and Dale Klapmeier. It relocated to Duluth in 1994. The company produces the world’s best-selling, single engine, four-to-five-seat airplane – the SR22.

“They are number one in sales for that segment in the aviation industry, not only in the United States, but in the world,” Rand states. “In Duluth, they currently have 675 full-time employees and they are in growth mode because they’re nearing FAA (Federal Aviation Authority) certification for a new jet called the ‘Vision,’ or ‘V-Jet.’ And they already have 600 orders,” she adds. “Individuals and companies have already put 10 percent down on a $1.9 million purchase, plus other bells and whistles, which would drive up the cost. So, that’s very exciting for us to know that growth is coming down the pipeline. This is a company that continues to be expanding its production space and their research and development facilities within the City of Duluth.”

The Cirrus campus is located at the Duluth International Airport, and according to Rand, the company just made a $13 million investment in a new 68,000 square foot, completion facility slated for occupation by year’s end. “And that’s about the time they expect that they’ll get their FAA certification on the jet,” she says. “Within the next two years, they’ve committed to adding an additional 150 jobs. So, we’re really excited about that job creation.”

While Cirrus’ investment is its own, Rand says that the city did support the company with needed infrastructure improvements and facilitation services. “For example, they needed a very substantially larger gas main for their completion center building and the paint booths that will go into it,” she explains. The city also assisted the company with the financing of the building, itself, by bonding for part of the note. It also secured some state grants to support the area’s further economic development. “It’s important to realize that Cirrus drives this aviation cluster,” Rand states, emphatically. “There are a lot of suppliers located in town that will continue to expand with this new jet product. We have the folks that manufacture aviation seats, harnesses, machine and tool shops – the list goes on and on.”

Keith Hamre is Duluth’s Director of Planning and Construction Services. He talks about two big projects on his agenda: one concerns regional rail transportation and, another, downtown redevelopment. “We’ve been working, for about the last nine years, in planning for what’s called The Northern Lights Express,” he begins. “It would come from Minneapolis/St. Paul and terminate in Duluth. But it would then connect to a passenger rail service that would go all the way to Kansas City and Chicago and then connect to the national network. It’s gone through all of the planning phases, and all of the environmental assessment phases required by the Federal Railroad Administration. We have our application in and are waiting for the next allocation of funds and the match, which would be through capital bonding by the state, to implement and start to build the passenger rail line, refurbishing tracks from St. Paul to Duluth, and then putting in the facilities in each of those locations. We’re projecting the first run by 2020.”

Hamre continues: “A project in the middle of our town, which we’ve been planning for the last couple of years, is the total reconstruction of our main street – Superior St. It’s to replace our sewer line and replace our water line which are about one hundred years old, and to re-do our downtown’s main street, which was last done in the early ‘80s. We put down brick pavers at that time, and so, we’re looking at re-creating our streetscape.” Hamre says that the project will also include an important energy improvement, or “green” aspect. “We have a ‘steam’ district in our downtown,” he explains. “We take Lake Superior water, which is about 38-39 degrees; we heat it up and put it through the pipes and heat downtown properties. And we’re going to convert that to a hot-water, closed-loop system, which will be much more energy efficient. It will probably increase our efficiency two- to three-fold.”

How much will the project cost and where will the money coming from? “We’re looking at a $20 million investment in that steam district, and the street, itself, is going to run about $23 million,” Hamre says. “We have municipal and state aid highway funds, which will pay for the street work and streetscape, and then we’ll get capital bonding dollars from the state for the infrastructure work which will be underground. Our utility funds will pay for the water and sewer lines via user fees.”

Adam Fulton is the Planning and Community Development Manager for Duluth, responsible for land use, long range planning, and community and neighborhood development strategies and programs, including assisting residents in obtaining affordable housing and preserving the city’s affordable housing stock. One of his department’s current projects is Gateway Towers, a 142-unit, affordable housing rental community in the eastern end of downtown. “We’re trying to get these units re-habbed and retain them as affordable housing in our city,” he says. “We work with our partners at the Center City Housing Corporation and One Roof Housing, as well as the Duluth Housing and Rehabilitation Authority (HRA).”

Gateway Towers is located where the Northern Lights Express will terminate, and Fulton knows that the market rate for a rental apartment near this soon-to-be-built rail stop will naturally begin to go up. “And that’s one reason why this Gateway Towers re-investment is very important to us,” he says. “It’s a low-income housing, tax-credit project – a $17 million investment in that 142-unit apartment building. We expect construction to begin in September of this year. And that will retain housing affordability in that location for the foreseeable future.”

Increasing the energy efficiency of Duluth’s housing stock is another important page in Fulton’s portfolio. “It’s cold up here in the winter,” he says, pointing out the obvious. “So, we’re working with our partners at the Duluth HRA and with a sustainability group called Ecolibrium 3, trying to develop sustainable models for housing retrofits. We’ve had lots of continuous investment in our housing stock and we want to make sure that that investment is as sustainable as it can be – which means making sure houses are airtight, and well-insulated, and getting the proper solar exposure that they need to use as little energy as they can in these cold winters.”

Harsh winters notwithstanding, Duluth is still a year-round recreation and tourist destination. Some 3.5 million visitors each year contribute more than $400 million to the local economy. “We’re a great outdoor, recreational city, even in the winter,” says Hamre. “We’ve got a ski hill and you can be on the slopes in a matter of about ten minutes. We have wonderful park spaces; we’ve got hiking and mountain biking; we’re close to the Boundary Waters Wilderness Canoe area; we’ve got water sports on Lake Superior. We were voted the Number One Outdoor City in 2014, by Outdoor Magazine.”

There’s no denying that, in 2016, Duluth is, once again, approaching another zenith. With its many maritime shipping companies and tugboat operators, its four Class 1 railroads and its 35 trucking firms, it’s still a big transportation hub for the northern part of the Midwest; it’s also a regional hub for education with several institutions of higher learning, including the University of Minnesota at Duluth, the College of St. Scholastica, and Lake Superior College; and it continues to grow its aviation, medical, banking, and retail sectors.

And that’s why Duluth, Minnesota is, to this day, the “Zenith City of the Unsalted Seas.”

WHO: Duluth, Minnesota
WHAT: A city of 86,000
WHERE: : Located in eastern Minnesota, on the shore of Lake Superior
WEBSITE: www.duluthmn.gov 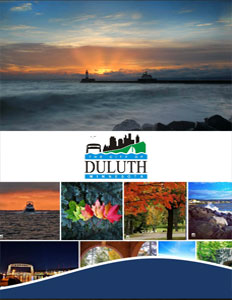