August 2016Past IssuesSupply Chain and Logistics

The Texas-Pacifico Transportation, Ltd. (TXPF), a U.S. subsidiary of Grupo Mexico, operates 391 miles of short line track over the 115 year-old, South Orient Line in West Central Texas. In 2015, its 28 locomotives hauled 658 million tons of cargo between Presidio on the Mexican border where the line connects to Mexico’s FXE (Ferromex) railroad system, and San Angelo Junction where it meets up with the BNSF and FWWR (Fort Worth and Western Railroad) lines.

Due to its location, TXPF, which has seen both good and bad times over its hundred-plus year history, has become a key player in the Lone Star State’s oil and gas industry. When Business View Magazine first talked to TXPF, we learned that, in 2014, 90 percent of its haul was fracking sand, used by the crude oil industry in its drilling process. But lately, according to Vice President of Sales and Marketing, Liz Grindstaff, sand cars make up only 65 percent of its traffic, attributable, she says, to a recent downturn in new well starts. “We’re somewhat in a reactive mode when it comes to the energy sector,” she explains. “So what our company is doing is trying very hard to diversify, and since we spoke last year we have moved hundreds of miles of gas transmission pipes that are taking natural gas into Mexico for power generation.”

What providentially replaced fracking sand for TXPF, but still kept it firmly in the service of the energy sector, is the Trans Pecos Pipeline being laid by a company called Energy Transfer Partners. When completed in 2017, the 143-mile, 42-inch diameter pipeline will originate outside Fort Stockton in northern Pecos County, Texas and run to the U.S. – Mexico boundary near Presidio. It will transport 1.4 billion cubic feet per day of natural gas to local towns and utilities in Central West Texas and on into Mexico via the country’s Federal Electricity Commission.

“That’s the most significant new client,” Grindstaff says. “It’s a huge international project. We’ve been moving pipe for almost a year. It was unexpected and quite fortuitous for us. The pipeline layout almost parallels our railroad tracks, so we were the natural carrier for that. It crosses the international border just north of Presidio and goes to Chihuahua City. We won the contract over the Union Pacific so I’m pretty proud of it.”

Another ongoing project that Grindstaff says will help the line diversify its client base is the rebuilding of the International Bridge that connects Presidio to Ojinaga, Mexico. “We’ll have all sorts of different freight types then between the industrial manufacturing or distribution areas of Chihuahua and Dallas/Ft. Worth,” she says. The bridge reconstruction was supposed to have been begun early this year, but a re-design has delayed the start date a bit. “The design has been completed; it has been approved by the State of Texas and the Army Corps of Engineers, and now it’s in the permitting phase,” Grindstaff reports. “Construction is expected in 2017 and it can be in operation by the end of the year.”

In addition, for the first time in its history, TXPF has decided to market it services to potential new clients. “To date, we’ve done very little sales in the sense of cold-calling,” Grindstaff says. “Most people have found us. But we have a new employee working here who came to us from Ferromex with experience in marketing and he and I are working together on international business development. So we are, for the first time, cold-calling customers in Mexico.”

And the value that TPXF is offering those customers is its location. “We’re a very favorable route,” Grindstaff states. “We’re one of the shortest routes from the mid-USA to a Pacific port for the Asian market. That’s why the railroad was conceived back in the late 1800s.” So, in terms of new exports, Grindstaff is hoping to garner more agricultural clients in Colorado, North Texas, and the Midwestern plains states for any cotton or grain going to Mexico or the Pacific. Regarding imports, she says, “There’s also a lot of manufacturing in the state of Chihuahua and a lot of companies there ship into the U.S. And so, whether the final destination is Dallas/Ft. Worth or a point beyond that, we’re the most efficient route to the north and east and to the east coast of the U.S.”

But regardless of any new types of clients it may acquire, Grindstaff maintains that TPXF is still likely to rely mostly on the energy sector for the bulk of its cargo. “That has been, for the last five years, the predominant industry that we serve,” she says. “And I think that if you consider our location and what the forecast is for the Permian (the Permian Basin in West Texas is, today, one of the most important oil and gas producing areas in the U.S.), energy will probably always be our predominant commodity.”

Given the vicissitudes and the historical ups and downs of Texas’ energy industry, Grindstaff still professes to be “cautiously optimistic” about her company’s future. “Actually, our first quarter was the best first quarter we’ve ever had,” she admits. “It set volume records and at this point, we’re back to the same net volume of sand cars that we were in 2015. It’s amazing how quickly things are changing. But good things are happening. We just sort of sit and smile and try not to brag too much. . . and hope for the best.”

For the Texas-Pacifico Transportation Company – it’s all about staying on track. 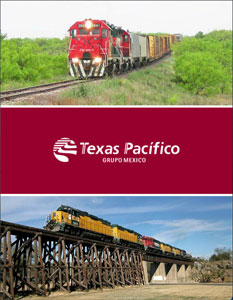