Co-founder Andrew Vagenas launched Pharmapacks with his four best friends in 2010. At the time, he, and one of his partners, owned a retail pharmacy in New York City, and neither one knew anything about e-commerce or the technology necessary to launch a successful online business. But in just six years, their company has become the biggest U.S. seller on Amazon, shipping out 130,000 packages per week of home medical products, health and beauty aids, household and pet supplies, and more.

Last year, Business View Magazine spoke with Vagenas and heard how the company created its own proprietary technology platform which included ways to track customer shopping patterns, the company’s catalogue of items, and product prices as they go up and down, while concurrently adding different distributors that it can price shop from. “All of that was built into our software, and we used that and created algorithms that can basically dictate sales for us as we plug-and-play our entire catalogue into different marketplaces,” he explained. In addition to Amazon and eBay, Pharmapacks is also the exclusive seller on Wal-Mart for health and beauty products. “So, we are getting a following from each company with a different group of shoppers,” he added. “Whoever is an Amazon shopper is our customer; whoever is a Wal-Mart shopper is our customer; whoever is a Jet.com, EBay, Overstock – whoever is a customer of those companies – ends up being our customer.”

Vagenas saw no downside to piggy-backing onto the most visited online, e-tail sites in the cybersphere. Armed with its catalogue of products, its technology, and its warehouse managing processes, Pharmapacks is often able to beat even its hosts’ best deals. “So when you go on Wal-Mart’s site, if our price and our shipping price is as good or better than Wal-Mart’s, they’ll let us have the sale,” he said. “So when you go to buy whatever it is, if we sell that product, it will say ‘purchased and packed from Pharmapacks.com.’ Wal-Mart puts our name, prominently, on the transaction. It tells the consumer that Pharmapacks.com is the actual retailer and a trusted retailer of Wal-Mart.”

Recently, BVM checked in with Vagenas to see how his business has progressed over the past year. The result: very nicely, indeed.

“Since last year, we’ve added three more distributors and we have about seven more right now in the works, so that’s a total of about 15 distributors we’ll be adding by the end of the year,” Vagenas begins. Recently, the company launched its services on Sears.com and Newegg.com. “Newegg is a pretty large marketplace that’s online. It’s mostly electronics but they’re branching out into other categories,” he says. “We’ve also landed a contract with Fresh Direct, which would most likely be live in quarter one of next year and that will be a very good contract for us. Fresh Direct is one of the largest e-grocers in New York and we’re going to be providing a health and beauty category to their website. So, that’s one big contract there. We have a few other contracts in the works, right now,” he adds.

Today, the company has approximately 350 employees, and has added natural and organic products to its line of make-up, household, and pet products. “And we’re launching our own, private line of skincare and other products by the end of the summer for people who are looking for off-brands, or unique or private brands,” Vagenas says. In addition to putting samples of its own products in every package that leaves the warehouse, this year, all of those packages will say “Pharmapacks” on  them. “Last year, we had generic packaging, so that’s our own form of marketing,” he states.

Pharmapacks is also expanding its market reach. “Since we spoke, we’ve launched Canada and we’ll be launching seven more Amazon global marketplaces this year, including our own website,” says Vagenas. “So we’ll be going international this year. We’re going to Europe and South America.”

This past year, the company’s continued success has been recognized by Ernst & Young which nominated Pharmapacks for its Entrepreneur of the Year award, and Vagenas, himself, won Crain’s 40 Under 40 award, “which was a nice honor,” he admits. In addition, the company’s outstanding growth rate has not gone unnoticed by other industry watchers. “We’re getting a lot of calls from private equity companies to buy pieces of the company,” Vagenas says, “ but we don’t need outside money, so we’re not looking at that, right now. We are currently on pace to hit a run rate of $160 million by the end of the year, just like we projected – possibly a little more.”

Another focus for the company, this past year, has been building upon its warehouse and e-commerce technologies. “Without the technology we built, and our internal platforms and software, we wouldn’t be where we are today,” Vagenas states unequivocally. “That’s what’s driving our growth.”

WHO: Pharmapacks
WHAT: An online retailer of health and beauty products
WHERE: College Point, New York
WEBSITE: www.pharmapacks.com 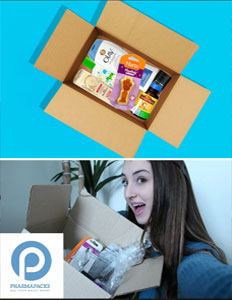