Specializing in shallow draft bay fishing boats for over 60 years

“It’s a great fishing ground because it only averages two and half feet of water,” explains Rob Youker, owner of The Sportsman, a shallow water boat dealer in San Benito whose main market is the Laguna Madre Bay system. “It grows great fish, and because the sun can get to the shallow bottom, it can easily grow plants, and plants start the ecosystem which brings on all kinds of stuff.” And naturally, all that “stuff” also brings on the fishermen who want to experience the thrill of catching fish, taking home memories that will last a lifetime.

Youker is a third generation proprietor. His grandfather, C.R. ‘’Dutch” Youker, started The Sportsman in 1951. According to his grandson, the founder was “a gruff old guy” who came down from Kansas to fish and hunt, but found no sporting goods store in the area. So he decided to open his own at Monroe and First Street in downtown Harlingen, Texas. “Well that didn’t last long,” says Youker. “He was here a short time before he got frustrated dealing with retail customers and decided to go back to hunting and fishing. He called my mother and father – I was nine months old at the time – and he said, ‘Bob and Betty, you come down to South Texas and I’m going to give you this little store. You don’t need to pay me for it; you just come down and take it over.’ And that’s how we got down here. So, my mother and father built it into three different locations – one in Harlingen, one in McAllen, and then this store that I’m at now in San Benito, Texas.”

In 1952, Youker’s dad, R. D. “Bob” Youker, decided to sell boats and Evinrude outboard motors from the San Benito location. A popular model at the time was the “Yellow Jacket,” a wood-hull boat known for its speed and durability. The boats were assembled in Texas by the Yellow Jacket Boat Company, whose one-time, part-owner was the popular cowboy and TV star, Roy Rogers. “That’s how we got in the boating business,” says Youker. “And then, a guy by the name of Bob Hammond ran into my father. He and three other guys were beginning to build one of the very first fiberglass boats called the ‘Glastron.’” Hammond and his partners, Bill Gaston, Bob Shoop, and Guy Woodward, founded the Glastron Boat Company in Austin, in 1956; the firm eventually became one of the largest boat manufacturers in the world. “We were one of the very first to have fiberglass boats back in the mid ‘50s,” says Youker.

Rob joined the company and took over the San Benito store in 1972, after graduating from the University of Texas in Austin with a degree in marketing. He explains how The Sportsman soon began to concentrate only on selling shallow water boats, developing a niche market ideally suited to the region’s particular aquatic character. “Well, people, at the time, were catching fish, but they had to walk quite a ways out on the shallow flats to get out to the fish,” he says. “So, a guy in Harlingen, Rem Elmore, a cabinet maker and fisherman, got his buddies together and, in his shop, they built one of the first ‘scooters.’

“A scooter was a 12-foot piece of plywood that had sides on it and was turned up in the front. They put a small console on the middle of it, installed a little 25-horsepower engine on the back and they would lean the boat to turn it – they didn’t even use the motor’s tiller. And that was the first boat to get these guys back on the flats, and that’s how we started in shallow water boats in the area. A few years later, a local boat manufacturer built the first fiberglass one.

“Today, we’ve evolved from that little homemade plywood scooter into what we have now: a specially designed technical boat that skims across eight to ten inches of water. Our top of the line 25-foot boat with nine-foot beam sells anywhere from $75,000, all the way to $120,000, depending on how you equip it. It rides like a dream; it goes shallow; it’s dry; it has all the bells and whistles you could ever want on a boat. So, we’ve gone from the scooter to this sophisticated fishing machine and everything in between. We sell shallow water flats boats, specifically made for the Texas Gulf Coast. The majority of our market is sports fishermen.”

Today, The Sportsman sells three different lines of shallow water boats, all of which are manufactured regionally on the Gulf Coast. A fully equipped 18’ flats rig starts at under $35,000 and can fish up to four fishermen. The dealership’s main supplier is Shallow Sport Boats, a 32 year old boat manufacturer run by another 3rd generation owner, Wes Hudson, and located a mere 35 miles from San Benito. Shallow Sports unique “quadrahedral” hull displaces water under the boat rather than outward. Because of its distinctive hull design the Shallow Sport far outperforms other boats in terms of shallow water hole shots, stability, and smooth and dry ride. The two 3rd generation owners joined forces in early 2000, with shared philosophies that have served them well. “That’s key – to bring two highly respected companies together though branding,” says Youker. “It’s a very powerful market tool that brings significance and exposure to both companies.”
While the other two stores have been sold, the San Benito location has about 15 employees. In addition to sales of both new and used boats, The Sportsman also provides service, maintenance, parts, and boat storage. Youker says that there are six other boat dealers in his immediate market area, but The Sportsman differentiates itself from the local competition by attending to the details. “The biggest thing that sets us apart is the fact that it’s not the one or two big things that we do real well it’s the thousand little things we do, real well,” he explains. “It’s like a wonderful play you go see; the actors are wonderful, and the story line is good, and the props are beautiful, and the lighting is great, and the writer did a great job and it looks so easy. Well, we do the same thing, but it’s also all the things we do behind the scenes: our facilities are spotless, our grass is green, our windows are clean, and it’s how we greet you like you’re a best friend who just came to visit. And if you do enough of those little things, it’d be silly not to get a boat from us.”

Youker says that when prospective customers come into the store, they can already feel the company culture at work. And part of that culture is exhibited in the way a Sportsman staff member will interview those customers to ascertain their boating and fishing experience, as well as their present needs. “When we get through the interview process,” Youker says, “we might take you to only one or two boats – not fifteen, which might confuse you – that focuses on the needs you just told me about. We constantly work on our culture. That takes time, energy, and effort. First, you’ve got to hire the right people. We’re very particular about that. We have to find people with good character and impeccable integrity, because you can change the mind of a teachable, new employee, but we can’t change the heart of a person. And we know if that’s not in place, they’re not going to work in our culture. We retain them by consistent training and making them feel part of the success of the company.”

Happily for Youker, when people do buy a boat from the Sportsman, they often become an intricate part of the store’s marketing strategy. “We create relationships,” he states. “We are a relationship-based selling machine. Our number-one marketing tool is our existing customer base. It starts with ‘wowing the customer’ every chance we get. A ‘wow‘ moment is one where a customer will literally go out of their way to tell somebody about their Sportsman. We want to ‘wow‘ you so you become a member of our army of loyal advocates. You’re a third-party endorser and the best advertising we can ever have. Nearly half of our sales are from direct referrals.”
Another way in which The Sportsman connects with its current and future customers is by taking part in various fishing tournaments in the area. “The Shallow Sport factory has an owner’s tournament once a year down on South Padre Island, and we’re a major sponsor,” says Youker, citing an example. “Most of our employees go down and volunteer for those three days. It allows us to be amongst about a thousand customers that own Shallow Sports already, and that’s a great tie-in.”

The Sportsman’s excellence has been recognized by Boating Industry Magazine as one of the top 100 marine dealerships in North America and the only exclusive shallow water boating specialist among the Top 100. The dealership consistently gets superior ratings from its manufacturers, and is the exclusive Yamaha Five-Star Service center in South Texas. Its reputation brings flats fisherman from all over the Gulf Coast.

Gruff, old “Dutch” Youker may have preferred fishing to selling, but he might have been pleased to know that his heirs have built a business that, today, allows many other anglers to enjoy the same pastime to which he undoubtedly spent many happy hours pursuing.

The Prospectors & Developers Association of Canada...

5 Incredible Stops Along The Wine Route... 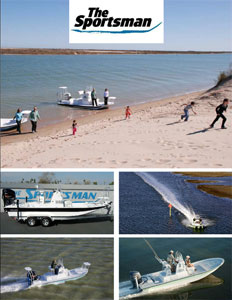