Where history and innovation thrive

Kingston, Ontario is located on Lake Ontario, at the mouth of the Cataraqui and St. Lawrence Rivers, a beautifully scenic waterfront location with a rich history and an eye on innovating for the future.

Native peoples who populated the area for many centuries include the Huron, the Iroquois, and the Mississaugas. French trappers roamed the region’s forests and waterways beginning in the 17th century, and France built the original Fort Cataraqui, later to be called Fort Frontenac, in order to protect the lucrative fur trade. By the late 1700s, the city had become a center of refugees loyal to the British crown who had fled north because of the Revolutionary War. It officially become the “King’s Town” in honor of King George III in 1787, the name was shortened to “Kingston” a year later.

Kingston began to grow as an important transshipment port for commodities from the western frontier, including wheat, flour, meat, and potash. In 1832, the British opened the Rideau Canal, connecting Kingston to Ottawa in the northeast. While its original purpose was military, the canal became important to the city’s economy
In 1841, Queens University was established and in the same year Kingston was named the first capital of Canada by Governor General Lord Sydenham. The college thrived, growing from an original 13 students to over 25,000 today and known as one of Canada’s top institutions. The city continued to prosper as an industrial center for another century and a half. It was home to the Canadian Locomotive Company, the largest locomotive works in the British Empire, and the Davis Tannery, also once the largest of its kind in the empire. Kingston produced railway cars, steamboats, distilled spirits, iron bars, and many other manufactured goods.

With heavy industry largely moving off-shore over the last several decades, the city’s economy has grown in the health care and hospital sector, military institutions, post-secondary education, and tourism. The population currently sits at about 125,000, with another 25,000 living in surrounding towns.

With all of this talk about history, how is Kingston positioning itself for the future? Kingston’s current Mayor, Bryan Paterson, sees his city as one that is constantly diversifying its economy and continuing to prove itself as an important geographic hub between Toronto, Montreal, Ottawa (Canada’s current capital), and the U.S. Mayor Paterson’s vision is to make Kingston a “smart and livable 21st century city,” and he discusses the many ways in which the city, so well-known for its historic properties, intends to forge ahead with this vision and its motto: “Where history and innovation thrive.”

“The vision of a smart and livable city is about tapping into our collective potential and leading the way as a city of innovation,” he begins. “The realization of this vision involves strategic investments to advance our community across cultural, economic, and social pillars.”

“For our economy we understand the importance of quality transportation links for visitors, businesses, and residents. To strengthen local transportation links, the city has invested $16 million this year for the expansion of our airport which will enhance service for Kingston and the region.” Paterson continues, “When we’re talking about creating a smart economy, we want to capitalize on the assets we have and identify where we have competitive advantages. We have an emerging class of entrepreneurs in the technology sector here in Kingston, many with connections to our three post-secondary institutions; Queens University, St. Lawrence College, and the Royal Military College of Canada. We have opportunities to capitalize on the knowledge, expertise, and research being done right here in Kingston. For example, the city has partnered with emerging technology entrepreneurs to renovate a historic building on the waterfront to create a rent-free incubator accelerator space to foster new businesses.”

Paterson also describes how the city plans to expand and accommodate Kingston’s tourism sector. “We have an enormous amount of beautiful waterfront contributing to our quality of life and the success of our tourism industry. When looking at our waterfront, I again see great opportunity – for example, the Kingston Penitentiary waterfront property. This is one of the oldest prisons in Canada. It was established in 1835 and operated until its closure in 2013, and has been dubbed ‘The Alcatraz of the North’ for its potential as a tourism destination. This is a significant property and we will be embarking on a community visioning exercise with the federal government to explore its potential revitalization and redevelopment. This is a project Kingstonians are excited about and I am always hearing innovative ideas for the site including the idea of a sailing centre, recognizing Kingston’s natural assets as the freshwater sailing capital of the world.”
Other ways in which Mayor Paterson sees Kingston being a smart and livable city, especially for its residents, is making the community more walkable, limiting urban sprawl, and “building up from within,” by revitalizing key areas within the city core. “A number of properties have been underutilized in the past, and as we look to become a more sustainable community limiting urban sprawl we are prioritizing the intensification of our downtown,” he says. “I see residential development as critical for the future health of our downtown. Kingston has one of the best, most walkable downtowns for a city our size in Canada and we need to sustain and build on this strength.”

The Mayor also explains how Kingston’s industrial history has created some challenges and opportunities for future growth. “As we look to build up our downtown the former industrial lands along our waterfront need to be decontaminated, meaning significantly higher costs for their development. While this is a challenge, it also presents an opportunity. As a city, we have been able to keep these lands attractive for development by creating a tax incentive program that provides a break on future property taxes as compensation for environmental cleanup. With this program we are creating win-win scenarios environmentally and economically.”

It’s clear that new developments, as well as their subsequent maintenance, will require substantial investment from both public and private coffers, a hot topic for municipalities across the country. Regarding the former, Paterson says, “Kingston has emerged as a leader with our annual one percent property tax levy investment in capital infrastructure. This means every year we have dedicated funds to maintain and upgrade our roadways, water and wastewater systems, bridges, and other capital needs. This has positioned Kingston well to ensure we can realize growth into the future.”

While Kingston continues to develop physically, its population is still growing at a moderate rate and demographic trends presage a slowing down of that dynamic over the next few decades. “That’s why we’re being proactive,” says Paterson. “We have initiated an immigration strategy that will look not only to attract new residents to the city, but also identify where gaps exist in our labor market and enable us to attract and retain new talent. A target area for retention is post-secondary students. As a community we are building a culture of support to encourage entrepreneurs and innovators to build their businesses here.”

While Kingston certainly has a lot of history to celebrate – 28 National Historic Sites, 635 municipally designated heritage properties, and 544 listed heritage properties – this is one Canadian city that always has its eye on the future. It truly is the place where history and innovation thrive.

WHO: Kingston Ontario
WHAT: A city of about 125,000
WHERE: On Lake Ontario, Canada
WEBSITE: www.cityofkingston.ca 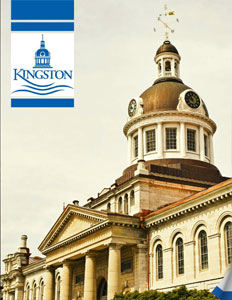