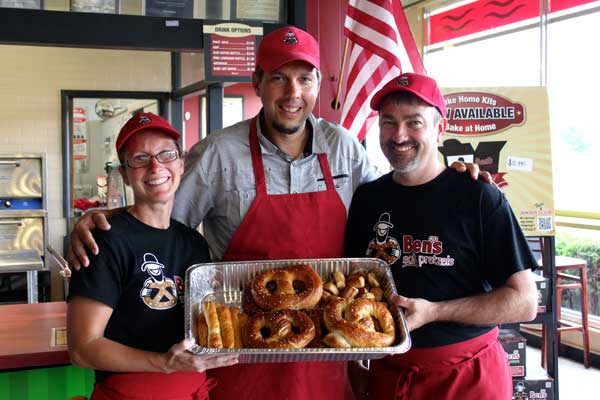 The pretzel is a very old and very prized food. Legend has it that pretzels were invented around 610 A.D., by Italian (some say German, some say French) monks, as a reward for children who had learned their prayers. The twists in the baked, doughy morsel that have become synonymous with the food, itself, supposedly represented crossed arms – the traditional posture for prayer. Over time, the custom spread throughout medieval Europe and the pretzel’s three holes came to represent Christianity’s Holy Trinity. Thus, pretzels also became associated with good luck, long life, and prosperity.
It’s entirely possible that that good luck and prosperity has reached across the oceans of time and space and landed, providentially, in Goshen, Indiana, USA. That’s the corporate home of Ben’s Soft Pretzels and two of its founding partners Scott Jones and Brian Krider, who, in just seven short years, have taken the storied food and turned it into a successful and thriving enterprise. Today, Ben’s Soft Pretzels is a leader in the soft pretzel market, part of an industry that does over a half-billion dollars in sales in the U.S., every year.

Pretzels originally came to the United States in the late 18th century, brought in by Southern German and Swiss German immigrants, better known as the Pennsylvania Dutch. Pretzel bakeries have populated the central Pennsylvania countryside for generations, and from there, the pretzel has spread across the country. Today, Pennsylvania still produces 80 percent of the country’s pretzels, and traditional pretzel baking techniques from centuries past are is still being practiced by descendants of the state’s early settlers.

It was one such practitioner of this particular culinary art that became the genesis of Jones and Krider’s future business. His name was Ben Miller. Yes, there is a Ben. His story, how he met up with his two entrepreneurial partners, and how that changed everyone’s lives, is recounted by Jones:
“Ben and his wife had a business called Ben’s Bakery, making breads and pies and cookies; really good, delicious items that enhanced everyone’s waist line, including my own. And they had an opportunity to buy a soft pretzel business, just immediately adjacent to their bakery stand in a farmers’ market in South Bend. So, they bought the little pretzel shop, but when they went to close, they found out that they weren’t getting the recipe. So they had to develop their own recipe to make the business work.

“They spent a lot of grueling hours, lots of sampling, and many, many different batches to come up with the recipe that we enjoy, today. They had a second location in a farmers’ market in Shipshewana, Indiana, and that’s where I discovered them. Ben and I became friends. He introduced me to all of his bakery items, and then, eventually, to the pretzel, which I thought was just out-of-this-world good. I shared that with my business partner, Brian Krider. Once he tried the product and fell in love, we both knew that it was really something special.

“We started wholesaling Ben’s bakery items, including the pretzel. We were selling to just a couple of places as a lunchtime item for them. That went on for a couple of years – just selling product here and there and eventually Brian had this epiphany one day and said, ‘We should just start a pretzel business around this pretzel.’ So, we wrote a business plan in ’07, focused around a company called Ben*s Soft Pretzels. It was going to be kind of a brick and mortar, mall-type location, a fresh-baked bakery. We didn’t know very much at the beginning. We figured we’d get into this and learn a lot about it as we go. We added a franchising component to the business plan and said that when we get to a certain point we’re going to start franchising, because we know this product is that good.”

The partners opened their first store in Elkhart, in May 2008. Their all-cash investment paid them back within the first year. That success led to opening up store number two within 18 months of the first one; store number three in 24 months; and store number four, immediately after that. In 2008, Ben’s Soft Pretzels also started a relationship with Notre Dame University. “We’re not the official pretzel of Notre Dame,” admits Jones, “but we are the only fresh-baked pretzel at Notre Dame. We do all of the football and all of the basketball games. That really helped spur a lot of growth for us, because we had a lot of people coming to Notre Dame games who tried the product and loved it.”

By the end of 2012, Krider and Jones felt confident that they were ready to franchise. They sold their first franchise in March 2013. It was one of their original locations and it went to a couple who had been asking them for two years if they could buy a business. Today, just two years later, Ben’s Soft Pretzels owns nine corporate stores and has over 30 franchise locations in Indiana, Illinois, Wisconsin, Michigan, and Florida.

One shouldn’t, however, ascribe the trio’s new-found prosperity as merely a consequence of good luck. A lot of thought and research went into the process of deciding whether to found a company to begin with, and then, what components would be necessary to make it a success. Jones, in particular, was skeptical, at first. Krider remembers hearing him remark, “Who wants to have just a pretzel?” But Jones explains why they went ahead with their plan, albeit, with no former experience in the restaurant business – a business, by the way, that his dad had warned him against going into for many reasons, including having to work with a product (food) that can spoil and go bad.

“There were two key elements to our business,” he says. “One was that we felt that we had a recession-proof product, because even when times are tough, people are still going to go out and do something with their children. Maybe they can’t afford to buy a few hundred dollars worth of clothes, but they can afford to spend a few dollars for a pretzel and a dip. So, we felt that there were not going to be any socio-economic barriers to our product.

“The other thing was that our process was so simple. And simplicity is still key. It is a cornerstone element of our business. We’ve got a simple process: it’s our secret mix, it’s water, and it’s flour. And none of those go bad.”

So far, little of anything is going bad in the Ben’s Soft Pretzel enterprise. Jones and Krider (who run the day to day operations) hope to open another ten to twenty stores, this year, expanding further into the Midwest and east of the Mississippi. Over the next five years, though, they believe that they can open at least 75 to 100 stores, annually.
They also have a very important relationship with two large, national sales chains: Wal-Mart, with its 2100 locations and Meijer with its 200. According to Krider, “If there’s an availability, we have an opportunity to be a part of one of their locations.” With two million plus people walking through these stores trying their product, it’s likely that their franchise target is not unrealistic. And, in fact, the company does very little marketing because it already receives an average of three to five applications per day.

What do Jones and Krider look for in a potential franchisee? Jones explains: “One of the things we look for is a little bit of tenacity and a lot of enthusiasm. We, of course, want to make sure that they have an aptitude for learning and can work their business. But the biggest component is the relationship. Can we create a good relationship? Do we want to spend 20 years with this person? Do we want to answer the phone when they call? This is a long-term commitment. So, we’re really looking at growing good relationships with good partners.”

All awarded franchisees go through the Ben’s Soft Pretzel training regimen. “We train them on operations,” says Jones. “We have two classes that they come for. The first class, our 101 class, is all about their business. It’s three days of business training. It’s the important things they need to have to start the business, operate the business, and run the business. It’s real in-depth and very comprehensive. Our second class is called ‘Reality Training.’ That’s five days of intense, in-store training at Ben’s University in Goshen, Indiana. We’ve got a big classroom where we’ve got all the audio/visual stuff that you would find in a regular classroom and, on the other side of it, we actually have a full, working bakery.”

Jones is very bullish on Ben’s Soft Pretzels’ future. Krider is likewise convinced: “Once we sell you the first pretzel, the pretzel will sell itself,” he declares. And the team will continue to follow their original plan for success. “We’re dedicated to making it a very simple process, while providing a very comprehensive training in how to turn that simple process into a very rewarding business,” Jones adds. “Or as we like to say around here: ‘We like to turn dough into dough! ”
By the way, Ben Miller is still involved. He and his wife own a number of Ben’s Soft Pretzel stores, and he oversees production of the company’s secret mix that it alone makes and ships daily to all the Ben’s Soft Pretzel stores.

And so, may pretzels continue to bring good luck, long life, and prosperity to all who make and enjoy them! 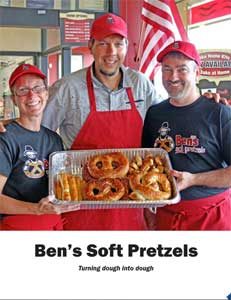