Past IssuesSeptember 2015Supply Chain and Logistics 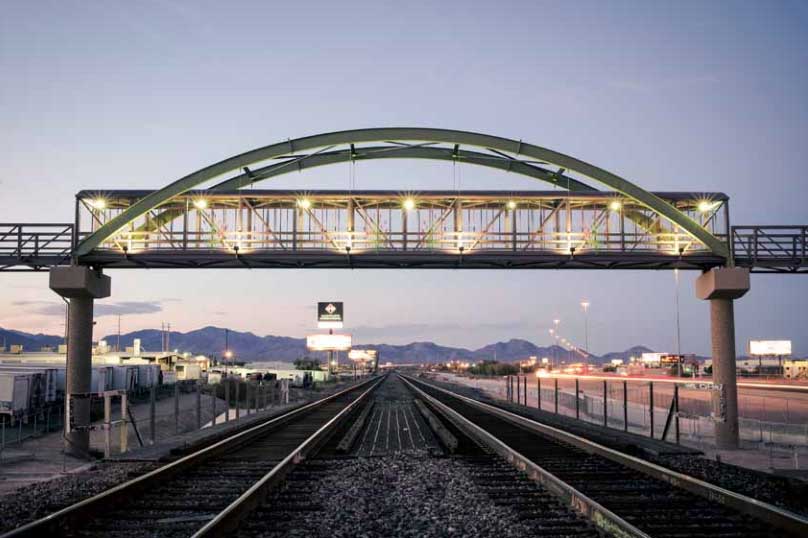 When one thinks about bridges, the mind usually pictures the giant, red-orange towers of the Golden Gate Bridge whose trusses span San Francisco Bay; or maybe the iconic, castle-like edifices of the Tower Bridge in London; or perhaps even the spider web-like cables that hold up New York’s Brooklyn Bridge, connecting Manhattan with its neighboring borough across the East River. But, in fact, the world is filled with countless smaller bridges, and surprisingly, many of these lesser structures are not constructed where they sit, but are actually pre-fabricated by companies who design and build their components, and then ship them to their customers for on-site assembly.

Big R Bridge is one such company that designs and builds these types of pre-fabricated, steel bridge structures for both the public and private infrastructure markets. Cameron Klein, the President and CEO of the 45-year old firm, recounts the company’s genesis from a small farm and ranch store to its current identity as one of the leading manufacturers in its field: “Big R Ranch Wholesale Company was the original business. It was a farm-store chain similar to Tractor Supply or Murdoch’s, operating in Colorado. They established Big R Highway Products to make a product called corrugated metal pipe. Years later, several employees bought that business from the farm and ranch store and moved it to a different location where they continued making corrugated metal pipe for drainage applications. That’s the very beginnings of Big R Bridge. From those days, they started manufacturing cattleguards, steel bridge decking and eventually saw an opportunity with small-vehicle bridges for the Pacific Northwest logging industry. It was a kind of happenstance beginnings – some entrepreneurs started making one product, saw an opportunity in another area, and said, ‘We think we can make that,’ and they got into the bridge business. It grew from there over the years and the company evolved to where it is today.”

And so today, Big R Bridge, which was acquired by its parent company, Atlantic Industries Limited of Canada in 2001, has over 130 employees working in three plants – Greeley, Colorado, Fort Worth, Texas, and Abingdon, Virginia. Its nation-wide sales team supplies custom-engineered products in all 50 states, as well as Canada, Africa, South America, and Asia. Big R has handled more than 10,000 installations to date and manufactures over 300 bridges a year. Its customers range from logging companies, golf courses, and manufacturing plants to the mining and railroad industries, military bases, and town, county, city, and state governments. Its four core products are above-ground vehicle and pedestrian bridges, buried bridges made out of corrugated metal sheets, MSE (Mechanically Stabilized Earth) retaining walls, and corrugated metal pipe and roll form products, which it has been manufacturing since its earliest days.

Klein describes the process accelerated bridge construction in that allows its customers to erect a bridge structure, sometimes in as little as a few days: “We ship bridge components, hardware packages, and drawings and we have always have either a salesman or project manager at the site, if there’s any questions, but most of the time the contractors that install our products are experienced erectors; they know how to read drawings. A bridge can come in pieces with a set of drawings or they’ll come in sections for them to put together. So, for a pedestrian bridge that’s one hundred and twenty feet, a contractor will bolt together three sections on the ground and then pick it up with a crane and set it right in place.”

Because every installation is unique, Big R Bridge’s designers and engineers are constantly working on new concepts and specifications. “No bridge that we make is identical to the next,” explains Klein. “Every product we produce is custom – to the finishes, the span, the look, the height – it’s really tailored to the site it’s going into and what’s needed there. That’s one of the specialties we have. Everything is custom. The challenge for us is to standardize our processes so we can be as efficient as possible, knowing that every product we make is going to be different.”

When asked what differentiates his company from its competitors, Klein states three main reasons: “Probably the most important – we have a full engineering team so we can do the preliminary concept and the architectural design; the full preliminary design of the bridge. So if you come in with a sketch on a napkin we can come up with some very cost-effective options that will meet your budget. We have in-house engineering, and many of our competitors don’t have that – they farm it out. But we have the capability to do the architectural and the structural design early on. Second is our quality. We don’t sell products that just meets the minimum specs – we provide product that will exceed the specifications. Third is our ability to handle the project, turn-key, in terms of doing all the engineering, the manufacturing, the delivery, and then provide the project management, on-site, to be able to assemble the bridge and meet a very tight timeline. Generally our bridges can be assembled and set within one to two days.”

Another advantage that Big R Bridge has over its competition is its ability to combine many products at the same job site for the same customer. “We tend to operate in niches, but the thing that ties all our products together is they’re all infrastructure-related, they’re all engineered and generally they have a lot of compatibility,” says Klein. “So, if we’re doing an MSE wall, or a sound wall, those products might be involved with a bridge project. We generally try to stay with stuff that we can engineer and manufacture so our sales guys are talking to the same, ultimate, end-user customer.”

Big R contracts those customers in a variety of ways. “In established markets where we’ve been operating for 45 years, it’s more word of mouth,” Klein explains, “but in newer markets, we attend a lot of trade shows. And we work with a lot of engineering consultants to pre-design and come up with bridge solutions that they can supply to a city or a county as a conceptual design, and the city or the county will put it out to bid. So we work a lot on the specification side, too, outside of trade shows.”

By the time Big R Bridge hits the half-century mark, Klein would like his company to be “the top market leader in prefabricated steel infrastructure products while growing the breadth of the types of bridges we build.” He also foresees “looking for acquisitions of complementary products that fit our model – products that we would engineer and manufacture that our main sales team could sell to our current customers and add on to what they’re already selling, while staying close to our expertise of steel infrastructure products.”

From its beginnings as a farm and ranch store, Big R Bridge has matured into a modern, ambitious, and entrepreneurial company that its CEO maintains is still trying to grow “aggressively but smartly.” It recently acquired the company that used to manufacture the steel reinforcement for its MSE walls, in order to better control production and shorten lead times. It also brought in new, automated CNC (Computer Numerical Control) processing equipment for its bridge-making plants.

Big R Bridge is not in the business of building the world’s longest bridges. In fact, about 400 feet is the upper limit of its clear span designs. But the next time you cross a short-span bridge over a golf course creek, or a commuter rail line, or pass under a pedestrian bridge that spans your local four-lane thoroughfare, you’ll probably know a little more about how it might have gotten there. Quite possibly, it’s a Big R Bridge, bridge.

WHO: Big R Bridge
WHAT: Manufacturer of prefabricated bridges, tunnels, and infrastructure components
WHERE: Headquarters in Greeley, CO
WEBSITE: www.bigrbridge.com 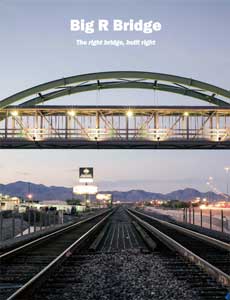