Customer satisfaction is the number one goal

In days past, when you had to bring your car in for service, it wasn’t always a pleasant experience. Waiting rooms were not particularly welcoming and the comfort of the customer was not always on the mind of the dealership or the shop’s owner. And buying a new or used car was also often less than fun. Salesmen would sometimes pressure customers into making quick decisions, or pad prices, or sell unnecessary contract extras. After-sale service was not a given and financing terms may have been less than straightforward. But that’s certainly not the typical customer experience at Dick Campagni’s Carson City Toyota Scion dealership in Carson City, Nevada. According to General Manager, Dana Whaley, there is one overriding philosophy that has contributed to the success of the dealership, two of the four in the Campagni Auto Group: they simply treat their customers like they’d want to be treated, themselves.

And that means extending such a wide array of customer-oriented services that the dealership has been awarded the prestigious Toyota President’s Award for the 27th year in row – the highest honor a dealership can receive in the areas of customer sales and service satisfaction. In fact, out of the 1250 plus Toyota dealers in the United States, only six have accomplished that goal. In addition, Carson City Toyota Scion has often been voted the #1 Best Auto Dealer in the Nevada Appeal’s Reader’s Choice Awards.

What are some of the services that a consumer can expect from this outstanding and well-recognized auto dealership? How about complimentary shuttle service for any customer living within a 100 mile radius? Or, for customers who spend $300 or more in service costs, a complimentary rental care for the day? And for its larger business accounts, the dealership even offers free pick-up and delivery of their vehicles. In addition, when passing the time in one of Carson City Toyota/Scion’s two waiting rooms, customers can take advantage of one of its two computers and printers, or play games on a complimentary tablet. Two large, flat screen TVs play classic movies and sports shows; the coffee bar has coffee, tea, hot chocolate, and cookies; and the Kid’s Corner offers books, toys, and games. The dealership even lends bicycles so that waiting customers can get some exercise and fresh air while their vehicles are in the service bay. And, oh yes, on Valentine’s Day all female customers get complimentary roses.

According to Whaley, this attention to customer satisfaction goes back many years when the Toyota Scion division became an official Toyota dealership in 1980. Dick and Mary Campagni came in as partners in 1985, and then bought out their former partner, Fritz Hitchcock, in 1989. In 1997, the owners of a local Ford store decided to sell but were being very selective about who they wanted to sell to, determined to leave the business in the hands of a family-oriented buyer who would promise to keep its employees and grow the dealership with them. “And so, they offered the Ford store to Mr. Campagni,” Whaley says, “and he purchased it from them.” Today, the Group has four franchises – Dick Campagni’s Capital Ford, Carson City Hyundai, and the combined Toyota/Scion store and service center.

Devotion to its over 100 employees is also an important aspect of the company’s culture. Whaley gives the following example: “Four or five years ago, when the market turned so bad, we survived and we were profitable and we laid no one off. One thing that we did – the upper management took pay cuts until we could get through it in order to keep our people. That’s what’s so wonderful about the store.”

The Campagni Auto Group is also well-known for its high level of charitable giving. In 2015, it donated over $200,000 to local organizations including: the Northern Nevada Children’s Cancer Foundation; the Carson Tahoe Cancer Center; Austin’s House, a shelter for abused and neglected children; Toys for Tots; St. Teresa of Avila Catholic School; and the Nevada Humane Society. Carson City Toyota also sponsors many community groups and events such as: the Carson City Little League; the University of Nevada at Reno’s varsity sports teams; the Carson City Chamber of Commerce; the Reno Aces, a local AAA baseball franchise of the Arizona Diamondbacks in the Pacific Coast League; the 4th of July Fireworks Show; and Family Night at the Carnival. The company also supplied Carson City High School’s new, 38 foot-tall scoreboard.

And, of course, as a long-time Carson City enterprise, the dealership has many relationships with other businesses. One such firm is Fast Company, which has processed data, photos, and cutting edge video services for Carson City Toyota Scion since 2001. Another is Dents and Dings, a trusted provider of auto reconditioning and interior repair services.
Like many dealerships, Carson City Toyota Scion is also adapting to the new paradigm of car buying – one in which consumers are more knowledgeable and have much more information beforehand. So, at the store, pricing is completely transparent and even advertised on the company’s website. But adapting to the market certainly hasn’t hurt its bottom line – on the contrary. “This year my business is up 7 ½ percent from last year,” Whaley reports. “And if you look at the rest of the dealerships in Carson City, well, really, if you look at the state of Nevada, there’s not a lot of dealers that are up 7 ½ percent.”

In addition, Whaley says that his dealership will soon be the first in the area to set up a virtual deal portal, where “you can purchase a car online in the comfort of your home – even in your PJs. All that’s left is the test drive. All the financing and everything will be completed before you even step on property.”
It’s no wonder that Carson City Toyota/Scion ranks so high in the hearts and minds of the local citizenry, as well as Toyota’s corporate headquarters. It’s the place where customer satisfaction is the number one goal.

WHO: Carson City Toyota and Scion
WHAT: A member of the Campagni Auto Group
WHERE: Carson City, Nevada
WEBSITE: www.carsoncitytoyota.com

Dents and Dings – Dents and Dings is a trusted provider of auto reconditioning and interior repair services to restore damaged vehicles back to their original beauty. Its mobile service is available within Reno, Sparks, and Carson City, Nevada and surrounding areas. Each member of the staff is trained in a specialty niche: from dents and windshield repairs to paint touch-ups and more. –www.dentsanddingsnv.com 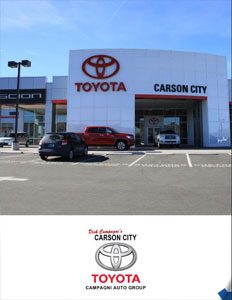