Picking the right lift for the job

It’s axiomatic that what goes up must come down. But when going up and coming down is an essential part of one’s work, as well as a quantifiable part of a company’s bottom line, going up and down both safely and efficiently must also be part of the equation. Custom Equipment, Inc. is a Wisconsin-based manufacturer of Hy-Brid Lifts – the aerial work platforms that help workers go up and down in the safest and most efficient way possible depending on their individual job requirements.

Aerial work platforms (AWPs) are used to provide temporary, elevated access for people or equipment. There are two main types of AWP. Large articulated lifts, sometimes known as “cherry pickers,” owing to their origin in fruit orchards, are widely used for maintenance and construction of all types, and are especially useful in the power and telecommunications industries to service overhead lines, and in arboriculture to provide an independent work platform on difficult or dangerous trees. The majority of articulated lifts generally require a wide supportive base to operate safely.
The other type of AWP is the scissor lift, which is a platform that can only move vertically, but is generally much smaller and nimbler than its larger, articulated cousin. Scissor lifts are ideal for applications where ample working space and lifting capacity is needed and maneuverability is essential. They have been used to position material, tools, equipment, and personnel for over 50 years, and are both safe and efficient.

The scissor lift is the sole product of Hy-Brid Lifts by Custom Equipment, Inc. “The business was started in 1981 by Steve and Lynn Kissinger,” says Justin Kissinger, the company’s Director of Marketing. “We were a small welding repair business. Eventually we knew we needed to develop a product line – welding and repairing wasn’t going to keep growing the company.” Kissinger says that his dad had once worked for a firm that produced lifts and “had some relationship with that type of product. So, we came out with a “2-in-1” scissor lift which was used for mausoleums in the cemetery industry.”

As time went on, it became apparent that, in order for the company to keep growing further, it would have to expand its customary market. “The mausoleum industry is only so big,” Kissinger laments. “Cremation is getting more popular, so you don’t need the lifts, as much, anymore. It’s still a good market, but not as strong as it once was.”
In 2004, Custom Equipment, Inc. decided to break into the construction industry. But in order for its business expansion to succeed, the company had to find its niche in a sector where scissor lifts had already been around for years. So the company began manufacturing the HB-1030, a small, ten-foot scissor lift. “The industry had only known 19 feet and up,” Kissinger explains. “So we came in with a machine that didn’t go as high as everybody else, but what set us apart was that we developed a very light-weight product. We designed it to be smaller and lighter. We came in around 1200 pounds; the nearest 19-foot scissor lift was 2,600 pounds and up.”

Finding that market sweet spot was the key to the company’s success. Light weight lifts were becoming increasingly popular, as well as necessary, in new office buildings that are constructed with access floors that route power, wiring, and ductwork below the work space, as opposed to above it. The access floor panels that cover the wiring, etc. cannot support heavier equipment; they require aerial work platforms that are light enough to travel across them. And Hy-Brid lifts filled the bill.

In 2007, the Hy-Brid lift line was expanded to include the HB-1430, which gave users a 20-foot working height. In 2010, two 14-foot working height lifts were introduced – the HB-830, which was self-propelled, and the HB-P830, the first push-around lift for the construction market. “We try to continuously evolve our products,” says Kissinger, “either by adding new features, or increasing the capability of our existing product line, or adding new products.” In fact, Hy-Brid Lifts were one of the first to be manufactured with an electric drive and steer mechanism. Previously, lifts were driven, steered, and lifted by hydraulics. Electric lifts are lighter and their batteries have a longer run time, Kissinger explains, “Because hydraulics tend to draw more amperage to run versus electric.”

Today, Custom Equipment, Inc. has grown from a small family business with a few employees to a globally-recognized, aerial equipment manufacturer. Hy-Brid lifts are fabricated and assembled in two facilities in Richfield, Wisconsin, northwest of Milwaukee. The company has 120 dealers in the United States, some of which have hundreds of stores, and many international distributors of its products.

Jeffrey Valind is Vice President of Manufacturing and Operations. He says that the company reaches out to prospective dealers via trade shows, email blasts, trade magazines, and social media. There are also many feet on the street. “One of the biggest ways to get our name out there is demonstrations done by our salesmen,” he says. “We’ll do the research, find the dealers, contact them, and give them a demo of our product. Seeing the product is where they get a feel for the features.” He adds that the company’s immediate goals are to have a larger share of the light weight, low-level access market and a wider product line within the 19-foot, and below, range.

Over its first decade in the construction industry, Hy-Brid Lifts by Custom Equipment, Inc. has certainly managed to find its niche in that market, which, today, makes up the vast majority of its customer base. Valind explains that the company is more than just a manufacturer: “One of the most important things encapsulated in our mission and vision is that, at the heart, we’re problem solvers for people; small enough and agile enough to do that,” he proudly declares. “So we get all kinds of attention because of our custom equipment beginnings, and we carry that through. We take great joy in solving people’s problems in a unique manner, and we’ve spent our careers doing that.”

With its continued success, Hy-Brid Lifts may ultimately defy those pesky laws of physics, and prove that – at least in the realm of business – what goes up doesn’t necessarily ever have to come back down. 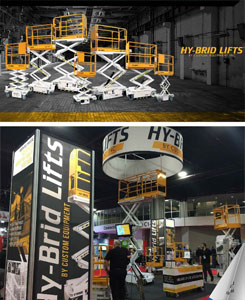