Arlington Heights, Illinois, a suburban community in Cook County, lies about 25 northwest of downtown Chicago. It was founded in 1887, when its population consisted of about 1,000 local farmers, and workers who commuted to the Windy City. Today, Arlington Heights is home to 75,000 and a daytime population of approximately 46,000; it is the most populous community in the United States that is incorporated as a “village.”

But while the designation, “village,” might suggest a quaint and quiet refuge from the more grandiose forms of civilization, Village President, Thomas W. Hayes, disputes that characterization to some degree by pointing out that Arlington Heights has recently experienced a sizable boom in its economic development. “We’re a 130 year-old community,” he declares, “but I like to consider ourselves as a leader and real model community in terms of being progressive in our economic development.”

Charles Perkins is Arlington Heights’ Director of Planning and Community Development. He talks about some of the Village’s recent, downtown redevelopment projects: “Several very large mixed-use developments in the hundreds of millions of dollars that were built and completed about ten years ago, have enabled us to set the downtown as an entertainment destination area for the northwest suburbs,” he says. “We have a live performing arts theater; a movie theater; and about 40 restaurants that give a lot of vibrancy in the evening and on the weekends.”

Other ongoing, redevelopment projects include: a mixed-use, eight-story building with 45 apartments and commercial retail; the construction of a new headquarters for HSBC, the world’s third largest bank, which is moving its North American facilities and some 1,500 employees to the Village; and Arlington Downs, a 35-acre development near the famed Arlington Park Race Track. According to Perkins, the $250 million project “includes the renovation of a shuttered hotel that closed during the peak of the Recession. The developers received permits for a new hotel and an expansion of the existing water park that was there. And they’ll build about another 100,000 square feet of retail space around a village green concept, and maybe up to another 400 plus apartments.”

When private interests invest in Arlington Heights, Perkins says that the Village works with them by amending any necessary zoning, density, and/or other land use regulations. However, some developments are public/private partnerships. “Many of the downtown developments were the result of those types of partnerships,” he explains. “The Village purchased property or invested tax increment financing funds into the projects to make them become a reality.”

(Tax increment financing (TIF) is a public financing method that is used to provide incentives for redevelopment, infrastructure, and other community-improvement projects. It provides the means for cities, towns, and counties to gain approval of redevelopment of blighted properties or for public projects such as city halls, parks, libraries, etc. Through the use of TIF, municipalities typically divert future property tax revenue increases from a defined area or district toward an economic development project in the community that would not develop “but for” the infusion of TIF funds.)

Perkins adds that the Village has designated three other TIF districts: “Two are mostly commercial shopping centers that involve significant public incentives; the third tax increment financing district, which was just created last year, is more of a residential, mixed-use development with TIF financing,” he says.

Of course, while all this new development is taking place, Village leaders still have to sustain and invest in the area’s infrastructure. “We recognize that if you don’t maintain good roads and good water infrastructure, and provide good police and fire services, nothing else really matters,” says Randy Recklaus, the Village Manager. “We’re coming out of the Recession, so we’re at a point where we’re really doubling down on our infrastructure. In this year’s budget, we’ve included funding for a 47 percent increase in our roads program. And we’re doing a ramp-up of our water infrastructure – we’re increasing the rate that we’re engaging in water main replacement by 300 percent between now and 2020. And” he adds, “we just completed two stormwater studied to look at ways we can improve our stormwater management infrastructure.”

“It may seem like we’re biting off a lot at the same time,” he continues, “but there’s actually a logic to it because a lot of these things exist underneath the roads. We want to take a coordinated approach to look at water, road, and stormwater infrastructure at the same time, so we can coordinate those efforts and do them together to minimize disruption to residents.” According to Recklaus, Arlington Heights also maintains a very robust park system. “Every neighborhood has, not only a number of smaller parks, but a large park with a pool and community center,” he says. “And the park district is in the process of upgrading all of those.”

Keeping its residents safe and secure is yet another responsibility of Village management, so Arlington Heights will soon be building a new, state-of-the-art police facility that, according to Recklaus, will help allow the village to remain a leader among Chicago’s northwest suburbs in the area of public safety. “We have an extremely low crime rate,” he states. “It went down 15 percent last year; it will go down another 12 percent when the 2015 numbers are all wrapped up. We’re consistently ranked in the hundred safest communities in the United States. Of the 437 communities in the U.S. that have a population of 75,000 or over, in the last two years, we have been in the top five for lowest crime rate. It’s something that we’re very proud of and take very seriously.”
As Arlington Heights looks toward the future, Hayes credits the Village’s recent resurgence to plans put in place decades ago. “We just completed an update to our Village Comprehensive Plan, which is a vision statement for what we would like the Village to look like in future years,” he says. “But one of the reasons for our great success over the past 20 to 30 years is that we’ve stuck to the comprehensive plan that village planners and leaders have had for this community for many, many years before.”

Perkins agrees: “In the last 20 years, we have built a new senior center, a new train station downtown, a renovated train station by Arlington Park, a new Village Hall, a new public works center, two new fire stations, and two renovated fire stations. So, the only building that has not been completed is the police station, and the Board approved our architectural service contract to move forward on that project.”

Clearly, are all three Village administrators are very proud of their community. Recklaus points out that Arlington Heights schools “are consistently ranked among the top schools in suburban Chicago. And our community library is one of only five libraries in the State of Illinois that has received a five-star rating. We take the quality of life seriously, here and want it to be a place where people want to live, retire, and engage in community life.” Perkins adds that, “Arlington Heights has won several awards, nationally and regionally, for the redevelopment of downtown.”
Hayes agrees and sums up his feelings about Arlington Heights: “I’m very proud of a community that is a large community but has a small-town feel. We have anything and everything for both our residents and for our business people. We’ve been a leader in a number of different areas and have been able to maintain a family-oriented feel to our community despite the fact that we’re the 13th biggest town in the State of Illinois. Ultimately, we’re a community – a village where everyone works together for the common good. And that includes all of our governmental agencies and bodies, our business partners, and our residents.”

It seems that the Village of Arlington Heights, Illinois, truly is the “City of Good Neighbors.”

WHO: Arlington Heights, Illinois (UAM)
WHAT: A suburban city of 46,000
WHERE: Northwest of Chicago
WEBSITE: www.vah.com/village_info 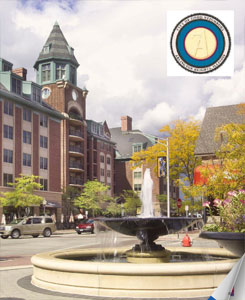