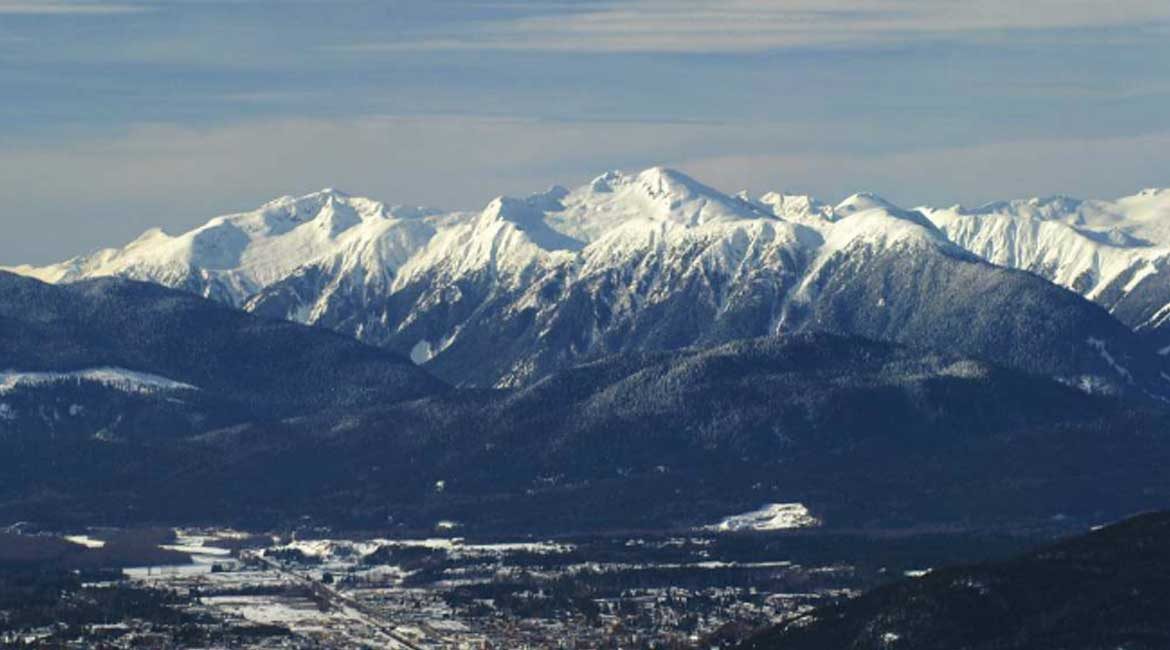 Centrally located in northwest British Columbia, the city of Terrace operates as the supply and service center for the region, catering to the communities of Prince Rupert to the west, Kitimat to the south, and north into the Nass Valley. Traditionally a forestry town, the city has been busy reinventing itself since the downturn of the lumber industry in the 1990s. A diversifying regional economy and growth in cultural tourism embracing local First Nations heritage has redefined the city and region.

Geographically speaking, Terrace is 550 air miles northwest of Vancouver, 37 miles from the Pacific Ocean, and sits on a series of natural flat ‘benches’ or terraces within the scenic Skeena River Valley. At 196 feet above sea level, in the shelter of the Coast Mountains, the region benefits from a climatic ‘greenhouse’ effect. Moderate temperatures and rainfall optimize growth of a variety of fruit, including delicious cherries, and other specialty crops.

The junction of the Skeena and the Kitsumkalum Rivers was originally the site of Tsimshian First Nation Settlements, and fur trading and gold prospecting were the principal activities in the area from 1770 to 1900. In the early 1890s, a steamboat route was established up the Skeena, and in 1905, George Little staked his claim, and purchased land in what is now Terrace. A forward-thinker, Little gave land to the Grand Trunk Pacific Railway to accommodate the location of a railway station in Terrace, rather than Kitsumkalum. It was a smart move.

The town was incorporated in 1927 and existed as a sawmill community until World War II. In the early 1950s, Terrace had a population of 350 and began serving as a distribution center for the new town of Kitimat. With the establishment of the Canadian Cellulose Company, wood processing became a major industry. Terrace was once known as the “Cedar Pole Capital” of the world – manufacturing over 50,000 telephone and electric power poles annually to supply the North American market. The world’s tallest pole (162 feet) was cut in Terrace, and currently stands in New York City.

There are big plans for Liquid Natural Gas (LNG) opportunities coming to the region, but final investment decisions have been delayed on that front. Still, City of Terrace Communications & Business Development intern, Brian Doddridge, states, “We’re not feeling discouraged about that. We have a number of initiatives put forward to diversify our local economy, and encourage many different industrial and commercial investments in the community.” The recent final investment decision by AltaGas to proceed with construction of a $500 Million propane export facility in neighboring Prince Rupert gives credence to the city’s optimism.

David Block, Director of Development Services for the City of Terrace, concurs. “Oil and gas and LNG have been the BC government’s focus in the region. But we also have expansion in Prince Rupert for the container port. We’re on the CN rail mainline from Prince Rupert through Winnipeg to Chicago. We have a lot of mining activity in the NW region. On Highway 37, towards the Yukon border, there are several mines in development, and others have started full operation in the last few years. So, we provide service and supplies to these regional industries. LNG has garnered the big media coverage, but there is a lot of other positive activity and diversity in the regional economy.”

Terrace, itself, is directly focused on strengthening their industrial tax base; primarily focused on industrial land development. One exciting opportunity came as the result of a major sale of 1100 acres to a Chinese investor. Work is underway to develop the property into an industrial Park. Block explains, “The city supports the investor developing that site. We expect it to have service parcels ready for industrial investment in the summer of 2018. It’s all being done privately – the investment was in the land. We are coordinating closely with them, but they’re doing the design, construction, and installation. They are working with an engineering design firm on the civil works. And looking at installing roads and sewage/water system infrastructure in 2017.”

Coinciding with these industrial developments and LNG activity, interest in land for residential development has increased, as have housing starts. Single family homes and multi-family developments are underway, and the first phase of a 35-unit townhouse complex was just completed.

The population of Terrace in 2015 was just under 12,500, though the regional district has between 17,000 and 18,000 residents. Doddridge notes, “We actually service an area of communities with a combined population of anywhere from 40,000 to 70,000, depending on where you draw the circle.”

While forestry is no longer a main industry, logging and lumber is still an active sector. The sawmill is undergoing proposed expansions; upgrading equipment to handle smaller-sized logs and a more diversified fiber supply. Terrace-based businesses also supply and service the mining industry to the north. “We have a lot of professional consulting services – surveying, geology, labs that do mineral testing for resource exploration,” says Block. “Kitimat has a large aluminum smelter – Rio Tinto – that went through modernization and was back online last year with the new production. We are responsible for much of the supply and service to that huge industrial operation, including basics like laundry.”

Professional services, materials equipment, industrial and commercial supply for institutional health and education are others key components in the city’s regional role. Terrace is home to the largest campus of Northwest Community College and has a University of British Columbia satellite campus. Also, the biggest hospital in the area is located here, with the highest concentration of medical services. In that regard, Terrace is keeping a strong focus on the health and vibrancy of its downtown, as many of the medical professional services for the NW region are located there. Revitalization of the downtown core for retail and professional services has been in the forefront since 2008. Of note: a revitalization tax incentive program for new downtown development with a 5-year exemption of 100 percent of the value of any improvements. Streetscape renewal to enhance walkability is also ongoing.

While many of these initiatives are based on economic sustainability, Block says, “there is a ‘green side’ to the story. “We partnered with the district on a new regional landfill. We’re a member agent and all our municipal waste is now going there. It’s a leading-edge facility developed for waste diversion – recycling, composting, organics – all of those initiatives are coming online with some significant environmental benefits.”

Terrace is a member city of the Province of BC Climate Action Charter with clear goals to reduce greenhouse gas emissions – as a municipal corporation, and community wide. Outreach and education through the City Planning Department offers opportunities for residents and businesses to participate in achieving energy reductions.

Tourists love Terrace. Its breathtaking mountain location is ideal for skiing, hiking, photography, and some of the best fishing in North America. In fact, the world record for the largest spring salmon catch (weighing in at 99 lbs.) is held by a visiting German tourist. Doddridge says, “Tourism is thriving this year. Numbers were up substantially, partially due to the low Canadian dollar, but also because Terrace is becoming known as a go-to destination. Three new hotels (93 rooms each) have opened in the last year, so the accommodation sector is increasing, too.”

Cultural tourism is another growing market in the region. With close to 20 percent of the NW area population being of First Nations descent, their heritage sites and museums are drawing visitors eager to experience the natural beauty and history of the Skeen River and Nass Valley.

Not surprisingly, the NW Regional Airport located in Terrace has a high volume of traffic that continues to grow. An $18-million expansion to the terminal and associated parking infrastructure is currently in progress. Block wants everyone to know that “even though Terrace is fairly far north in BC, it’s easily accessible. There’s a highway and rail through the city, and we have excellent daily, multiple-flight air service to Vancouver (1 ½ hours), and connecting to North America and the world.”

WHO: Terrace, British Columbia, Canada
WHAT: A Regional supply and service center with a population of 12,500
WHERE: Skeena River Valley, northwest BC
WEBSITE: www.terrace.ca 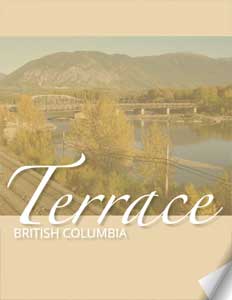