Jack Godfrey Jr. is the President and CEO of Comet Cleaners. He’s the third-generation owner of a family business that goes back almost 100 years. “My grandfather started in the dry cleaning industry as a kid,” Godfrey relates. “He grew up on a farm southwest of Ft. Worth, Texas. He was one of nine children and he ventured out at a very young age. He had a fifth grade education and he started working in a tailor shop back in the 1920s. That’s when he got started in this industry. He didn’t like sitting down at a sewing machine, and he got interested in the aspect of pressing garments. By the time he was 18, he bought his first dry cleaning store.”

Godfrey’s grandfather met his grandmother, Ellen, in San Angelo, Texas some years later. Together, they moved back to Ohio, where she had come from, and Grandfather Jack stayed in the dry cleaning business, representing dry-cleaning equipment manufacturers as the Jack Godfrey Equipment Company. “He was a real fanatic about cleanliness and perfection,” Godfrey says. “He really was instrumental in the whole evolution of the dry cleaning business as it is today. He was always on the cutting edge of new equipment. He worked hand-in-hand with different manufacturers as he represented their products. “

Ohio was also the home of the Martinizing Dry Cleaning Company. Martinizing was a revolutionary cleaning process pioneered by a New York chemist, Henry Martin, in 1949. At the time, dry cleaning was done with flammable solvents, so the plants were located remotely from the storefronts. Customers would drop off their cleaning “in town” and the garments would travel to the production facility to be cleaned and pressed, and then returned to the store several days later for pickup. By using a non-flammable solvent, the use of which was discovered by Martin, dry cleaning plants could now be located much more conveniently, and the process could be carried out in a much timelier manner. The use of this non-flammable solvent was adopted throughout the industry and revolutionized the business as facilities could better serve their customers and provide much faster turn-around on the orders. Operationally this has been termed “on-site cleaning” (as opposed to the “remote” cleaning of the past). Godfrey’s grandfather was an early user of the process when he opened his original Comet Cleaners store in Norwalk, Ohio, in 1957.

By the 1960s, the elder Godfrey had moved back to Arlington, Texas. Godfrey’s father, Jack Sr., was the oldest of four children and grew up in the dry cleaning business, as did Jack Jr. “It’s kind of in our blood,” says Godfrey. In 1967, Godfrey’s grandfather incorporated as Jack Godfrey & Sons, and continued to evolve the business. “He was the first person to put cartridge filters on a dry cleaning machine, which is used in every dry cleaning store, today,” Godfrey recounts. “And my grandmother was first to put an iron attachment on a press.”

Over the years, the drycleaning industry as a whole expanded widely even though it was sometimes faced with difficult challenges. According to Godfrey, about half the drycleaners in America went out of business in the 1970s, when polyester fabric became a popular clothing material, and in 1994, the solvent Perchlorethylene, which was used by 90 percent of the country’s drycleaners, was declared a possible carcinogen. Fortunately, Comet Cleaners was instrumental in testing, marketing, and implementing a new, environmentally safe dry cleaning solvent, manufactured by Exxon, called DF 2000.

Comet Cleaners also found that it needed to update its business model in order to stay relevant. Godfrey explains: “Up until the turn of the century, we were really more of a licensor and not a true franchise system. I saw that the future could be tough on us if we didn’t become a true franchisor, even though we did everything from the site evaluation, negotiating the lease, putting the store in, and being hands-on with every single person we put in business.” The problem as Godfrey saw it was that if and when an owner sold a Comet Cleaners store, the new owner was legally able to change its name and drop the Comet Cleaners appellation. “It doesn’t look too good when you have 600 stores, but only 200 of them are currently using your name,” Godfrey says. “So, we had to rewrite our contracts. We weren’t a true franchisor up until the last ten years when I bought my dad out.”

Godfrey states that, lately, the franchise model is doing well. “We’ve got about 25 new store openings on the books, right now,” he reports. “We just opened up four new stores, this year. We’re going to keep moving forward. I’m very involved in the start-up of every location. We’ve got some very good strategic partners that we work with. The manufacturer of the drycleaning pressing machines is the same company we were using back in the ‘50s and they still have the best pressing machines in the industry. I plan on keeping this business in our family for years to come.”
Godfrey believes that every business is ultimately in the customer service business. “Our business just happens to be drycleaning,” he says. “But my real product, what I offer people, is the most beautiful, state-of-the-art drycleaning facility. I was taught by my grandfather and my dad that you need to be able to eat off the floor of your stores. Cleanliness is next to godliness in this business. And I am a freak about stores being in impeccable condition. And what I tell people is the overall product I’m offering you as a franchisee is a state-of-the-art drycleaning facility that you can’t find anywhere else. Our motto has always been Fine Drycleaning at Affordable Prices. And that’s always worked for us.”

WHO: Comet Cleaners
WHAT: Franchisor of dry cleaning stores
WHERE: :Headquarters in Arlington, Texas
WEBSITE: www.cometcleaners.com 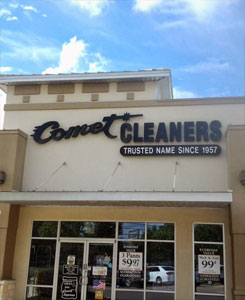