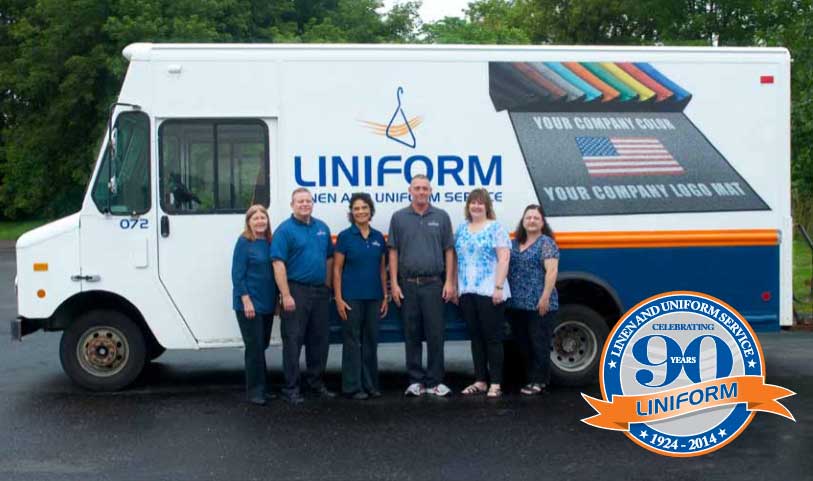 Liniform is a full service linen and uniform service company based in Barberton, Ohio. It was founded in 1924, by two brothers, Albert and Chris Good, who came from West Virginia to Ohio to establish the Barberton White Wet Wash Company. Bertha Jenkins, who began working at Liniform in 1971 as an entry-level employee and is now the President of Liniform, talks about the Good brothers and the company’s early days: “They would go around, house to house and pick up peoples’ laundry – mostly their white goods. They would bring it into the laundry, wash it, and then take it back to the housewives who hung it on a line to dry. They did that for a long time. Along with that, they opened up some dry cleaning stores in town.”
After World War II, Albert’s son, Albert Edward “Ed” Good, Jr., took over the company. Because people were now buying their own washing machines, Ed Jr. decided to change the firm’s business model from individual households to serving established businesses, providing linens, towels, and uniforms to industrial customers. He also changed the company’s name to Barberton Laundry and Cleaning, Inc. “Back then there were five family-owned laundries in the Barberton/Akron area,” relates Jenkins. “They all closed, sold out, or moved on. And so we were the only local, family-owned laundry left in our area that was full-service.”

By the 1970’s, the company’s family laundry and dry cleaning services had ceased, so it changed its name again – this time to Liniform Service – in order to better reflect its focus on linen and uniform rental, and cleaning services for its commercial customers. The company also altered its machinery to conform to the change in uniform fabric from all cotton to permanent press, cotton/polyester blends. Jenkins explains: “Cotton pressing was hard work. Then the steam tunnel came and so all you had to do was wash, dry, and put them through the steam tunnel to get the wrinkles out. You no longer had to iron by keeping us on the presses. So that really boosted our rental in the garment business. It was efficient and you could compete because you didn’t need as much labor compared to pressing.”

In 1981, a huge fire destroyed over half of the company’s existing building and 90 percent of its equipment. Ed Jr. decided to rebuild and reinvest in the business, and, with help from the local community, was able to secure additional property and expand the building. As time passed, whenever it came to developing or transforming the company to keep up with current trends, Jenkins gives most of the credit to Ed Jr. “He was really a very forward-thinking person. He always stayed involved in industry groups and tried to stay up on what was coming,” she says. For example, early on, Ed saw the impact that computers would have on business, but no one was writing software specific to his industry, so he learned to program computers, himself, creating, developing, and later marketing computer software for the industrial linen industry. “If you ever had the opportunity to talk to him, you always walked away learning something,” says Jenkins. “He was a great mentor.” Ed passed away, last year, at age 93.

In the early 1990s, OSHA (the federal Occupational Safety and Health Administration) came out with its blood-born pathogen standards, which prohibited medical personnel from taking their uniforms home, requiring them to send them out for cleaning. “That’s really when our medical garments started to grow,” says Jenkins, “because we were out in the field, talking to the doctors and facilities we were already servicing for their patient gowns and their towels, and such, and we found out that a lot of female employees didn’t want hospital whites and blues and greens. So we offered them a full range of really colorful scrubs and warm-ups, and our business really took off. And the manufacturers were manufacturing all of these nice, colorful garments so we had no problem getting them. And we still do that today.”

Jenkins continues recounting the company’s progress: “In 2005, we decided that we really wanted to get deeper into the ‘retail medical.’ We added 28,000 square feet of space to our current facility and we started working on remodeling our plant, separating soil and clean. For a small, family-owned company that was one of the biggest investments, barring the fire, that we did. It was a ten-year project. We did that thinking of the HLAC certification, because we had to totally revamp our plant. We got our certification in January, 2015.” (The Healthcare Laundry Accreditation Council (HLAC) is a non-profit, accreditation organization developed to provide a third-party inspection and accrediting program for laundries processing healthcare textiles based on the highest standards for patient safety and infection prevention.)

Today, Liniform services over 2,000 clients per week, including medical and dental offices, restaurants, caterers, schools, manufacturers, hotels, and many other businesses in a 13-county area in northeastern Ohio. Its 50 employees and nine trucks supply linens, uniforms, mops and mats, and rest room supplies, as well as direct sales items such as decorated polos, T-shirts and other apparel, large capacity hygiene paper products, and soap and skin sanitizer.

“Our focus is on small to medium sized businesses. That’s really our niche,” says Jenkins. “We service anything from your local pizza shop to your emergency medical clinic and surgery center – the ‘retail medical.’ We used to do heavy industrial, but we’ve gotten away from that. We wanted to stick with the ‘cleaner soil.’”

According to Jenkins, what differentiates Liniform Services from its competitors is its one-stop shop capabilities and its excellent customer service. “Our route drivers come in; they stock and organize our customers’ shelves. They have the authority to make decisions. We’re small enough so that our service department can still give that personal service, but we’re large enough to compete very nicely with the bigger companies. And we spend a lot of time talking to our customers and finding out what they need, so we use our customer base to improve our services. If one of our customers has an issue, the first priority is ‘Fix it!’ and then let’s deals with what happened. That’s kind of our motto. If a customer calls and complains we fix it. We don’t hassle them and then, after the fact, after we’ve taken care of the customer, we say ‘Where did the ball drop?’ and ‘How can we make sure that it doesn’t happen again?’ That’s our culture and we are proud of that.”

Liniform Service is a Women Owned Business, and still a family affair, owned by Ed Jr.’s three daughters and son, Bertha Jenkins, and Pat Shultz, the company’s Vice President who recently retired. It is a member of the CSC Network: the National Alliance of Independent Launderers, and the Women Business Enterprise National Council. In addition, the company is a TEC, Total Energy Concept, Certified Green Facility, dedicated to reducing, reusing, and recycling. It is an active member of the Barberton community, devoting time and money to various local charities and organizations.
In 90 years, Liniform Service has come a long way from the days when Edward and Albert Good drove around town, picking up laundry door-to-door. And yet, this venerable company still operates out of its original space, and still serves the cleaning needs of its northeastern Ohio neighbors and friends.

WHO: Liniform Service
WHAT: Linen and uniform services for commercial clients
WHERE: Barberton, OH
WEBSITE: www.liniform.com 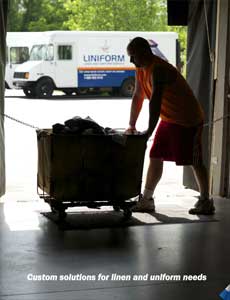