Clean and GreenNovember 2015Past Issues

“As a Christian college, creation care is a major part of what we talk about and think about; it’s who we are; and not only for people, but for the land and the resources we’ve been given,” says Kathie Shafer, Vice President of Operations at Messiah College, a private Christian school of 3,000 students, located in Mechanicsburg, Pennsylvania. Messiah’s dedication to the stewardship of natural resources, based on its fundamental religious values, has fostered a culture of sustainability that has permeated campus life for over 40 years.

Early initiatives that put Messiah on the green path include a groundbreaking, week-long course that was introduced during a 1971 winter session, called “Man and His Environmental Problems.” In response to the impactful syllabus, which included seminal works on environmental stewardship, students started EnCon, an environmental concern organization that hosted special programs and awareness days about environmental issues. By the 1980s, the school had instituted a campus wide recycling program that collected material from residences, classrooms, and offices, and Earthkeepers, another student organization, was established with creation care as its focus.

One result of that meeting was the creation of a campus sustainability director position. Today, that position is held by Brandon Hoover, who divides his time between teaching and administering many of the campus’ environmental and sustainability programs. He talks about the school’s sustainability curriculum: “We have a sustainability major here on campus, with a Bachelor of Arts in Sustainability Studies,” he says. “And that major has a core curriculum that all students in the major are required to take. Then there are three different branches, or concentrations, within the major: sustainable agriculture; public policy; and community and urban development.” Hoover explains that those concentrations span three different academic departments: the Dept. of Biological Sciences, the Dept. of Sociology, Anthropology and Criminal Justice, and the Dept. of Politics and International Relations. “So there are a lot of interdisciplinary and cross-disciplinary conversations around what sustainability means and how these various systems – ecological, social, and political – talk with each other to try to create a more sustainable world – because problems in the 21st century do not happen in disciplinary silos,” he adds.

Hoover, himself, teaches a class called “Environmental Issues and Sustainable Solutions,” a course that has both pedagogic and practical outcomes. “The honors section of that course makes recommendations to our campus operations crew at the end of the semester on what the next sustainable initiative can be,” he says. “From those presentations, there are a few nuggets that fall and take root here on campus. So, some of the projects that we do here are from the curriculum.”

Shafer believes that it’s all well and good that students have ideas and she admits, in fact, that many of the school’s sustainability initiatives over the years have been student-driven. Indeed, it was a small group of students that pushed Messiah’s President, Kim Phipps, to sign the Presidents’ Climate Commitment, pledging that the school take concrete actions to achieve campus wide climate neutrality.

But she also tries to make sure that their ideas have practical applications. “When they came to me about a community garden, I said, ‘That’s great, but you need to put a business plan together. How are you paying for it? How are you going to keep it going after you graduate?’ And they did it,” she says. “And it’s been extremely successful. Not only is the current garden producing more produce than ever, we’ve expanded to another location. And the profits out of that garden have actually helped pay for some of the student workers in the garden.”

Anna McKay, a current senior at Messiah, is the Community Garden Coordinator. She says that one of the garden’s current focuses is to reach beyond the campus walls, whenever possible. So, for the last two years, campus tours by the surrounding area’s school children have included a tour of the garden and a brief lesson on composting. “The kids get really excited, because some of these tours come from inner-city schools, and it’s a very new opportunity for them to see what we’re doing,” she says.

Dwayne Magee is Messiah’s Director of College Press & Postal Services. He talks about how the issue of sustainability has been approached from his purview and how it influences everyday campus life and work: “Last year, we eliminated couriering our mail to the various buildings across the campus; everyone on campus, now walks to the post office to get their mail. Another thing we did was, we took a fleet of 200 laser printers and 53 copiers and we reduced those down to multi-function devices and placed them in general work spaces, so not everyone has a printer in their office. They now have to think about what they’re going to print and if they really need to print it they get up and they walk to a copier, where they then release the document. We have found that that step, alone, eliminated hundreds of thousands of prints. The cost savings are incredible.”

Saving money is always an additional and welcome result when institutions promote sustainability concepts and environmental stewardship – especially when it comes to the installation of alternative energy systems in its buildings. In 2011, Messiah became home to the nation’s fourth largest solar thermal system. According to Shafer, it was the first institutional project that was funded with the knowledge that there would be a payback because of a reduction in utility costs. The $1.5 million system serves all the hot water needs of the three residence halls that comprise the North Complex. It’s payback period is estimated to be six years.

Another alternative energy project is coming online soon. “We are in the process of installing natural gas into our campus,” says Shafer. “This is something we’ve wanted for at least ten years. And we’re building a combined heat and power plant. With it, we’ll generate enough electricity to take our largest complex – dining rooms, gym, and fitness center – offline. After the third year, we’ll see a million dollars a year savings in our utility bills.”

In another example of cost-saving combined with sustainability, Messiah College processes all of its own compost, on site. Mark Wirtz, the school’s Director of Dining Services, is particularly pleased with the “Waste in its Place” program, as his office partners with the Sustainability Office and Campus Grounds to compost post and pre-consumer waste from all three dining facilities. The finished compost product is then used on the campus’ grounds, flower beds, garden, and athletic fields. “It’s been a great savings in terms of removal of waste and in not having to generate so much purchasing of product from other sources,” he says.

While Messiah College has been in the forefront of campus sustainability for many years, at least one student is mindful that what has already been done in the realm of environmental stewardship is only a prologue to the tasks that lie ahead – and that the need for action is urgent. “I do think we’re reaching a point where it’s ‘do or die,” laments McKay. “So, as students, it’s very critical that not only are we, ourselves, learning, but that we’re also teaching those around us who are in a place where they’re able to do something, right now. Because if we’re making 30 or 40-year plans, it doesn’t matter nearly as much as what’s going to be happening in the next 10 years or so, or even less. And so, it can be seen as a very daunting task, and it is. It’s very evident that something needs to be done, now. So, I would agree that there’s a lot of pressure on our generation, but I think there’s also a lot of hope there.”

At Messiah College, environmental stewardship isn’t just the latest trend; it’s a way of life. This fact is borne out every day in the passion of its students, the dedication of its teachers and administrators, and the active participation of its staff. If hope exists anywhere, then surely it exists nestled within Messiah’s green and sustainable campus. 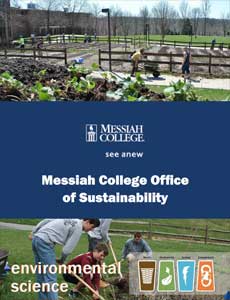