The Missouri Slope Lutheran Care Center was created in 1962 by a consortium of local Lutheran church congregations and organizations in the greater Bismarck area. According to Reier Thompson, the Center’s current President and CEO, its founders saw the need for a place where the community’s elderly citizens could receive compassionate and professional care because there weren’t many other nursing facilities around at the time. Groundbreaking took place in 1965 and its doors officially opened two years later. In the beginning, there were only two different nursing units with a total of 80 beds. Today, the Center houses six nursing units with 255 beds, making it the largest, free-standing nursing facility in its part of the country.

Services offered at Missouri Slope include skilled nursing care, IV therapy, preventative care, hospice and dialysis coordination, memory care, inpatient and outpatient physical, occupational, speech and restorative therapy, pastoral care, and transportation for all residents for medical, vision, and dental visits. The Center has approximately 580 employees with 35-40 family practice and internal medicine physicians from two local hospitals who are on call 24 hours a day, seven days a week, providing primary care for its residents. In 2003, the Center also transitioned its independent living apartment building into 64 one- and two-bedroom apartments and named it the Valley View Heights Assisted Living facility.

Thompson believes that Missouri Slope differentiates itself from other nursing facilities in the area by being the only one that is not corporately-owned. “We’re a locally operated, locally governed, non-profit organization and everyone else, over the years, has slowly migrated over to being part of a larger corporate chain of nursing facilities,” he explains. “I’ve worked in a corporate chain before coming here and one of things I like about our capabilities is that we’re able to make our decisions locally and respond to changing market needs and changing employment needs without having to run up the corporate ladder.”

According to Thompson, Missouri Slope has an occupancy rate that hovers near 100 percent, noting that the need for senior care facilities in his community, independent or otherwise, is far outstripping the present supply. “We’re looking at about a 25 percent growth in the 65-plus population over the next five years, so we know the demand is there,” he says. “We also know the supply is definitely not there.” He believes that one of the factors preventing the Center from expanding rapidly is the moratorium on new nursing facility beds due to state rules that have been in place for many years. “So, for us to be able to put up another building and offer another hundred nursing beds is difficult because we have to find bed licenses that maybe some small communities are selling because they’re not able to keep their occupancy high; maybe there’s two here, five there, and maybe ten somewhere else, but it’s tough to acquire a large quantity,” he laments. Another factor is the reduced number of available skilled workers in North Dakota, a state which has one of the lowest unemployment rates in the nation. “We’ve only got about an eight percent growth in the 18-64 population – the working population, so it’s a challenge to find and keep staff,” Thompson adds.

In order to cope with growing needs coupled with diminishing resources – about half of the Center’s residents are Medicaid patients and the government is constantly telling it to try and “do more with less’” – Thompson would like to see Missouri Slope become a center of learning and innovation where “the smartest people in the room” can help determine ways to bring costs down and provide services more efficiently. “One of the things that we’re seeing is that the ‘silver tsunami’ is entering the healthcare industry at exponential rates and putting more demand on it,” he says. “We’re seeing that here in Bismarck and there’s really no solution as to how we’re going to slow this down and slow down the bleeding of all the expenses that’s going to be put on the system.”
Thompson’s plan to counter this dynamic is to partner with other institutions such as local colleges, medical schools, and nursing schools in order to achieve more engagement at all levels and get those students into the Center on a daily basis. “They would have access to this population to do studies, to research, to hypothesize, to theorize, and to look at what’s going on in the nursing homes and how care’s being provided to see if there are different things that we could be doing to help bring the costs down or be more efficient,” he says. Thompson also likes to empower his staff to come up with ways in which services can be provided more effectively as they go about their day-to-day tasks.

Over the next few years, Thompson says that he would like to have as many partnerships in place as possible and also expand the Center’s offerings to include child care, seeing it as a “big need in our communities.” He also believes that the intergenerational contact that would accrue from having both young and old in the same facility would benefit all of its residents, regardless of their age.

Putting its residents first has been the mission of the Missouri Slope Lutheran Care Center for almost fifty years. According to President Thompson, he and his staff look forward confidently to another half-century of providing professional and compassionate care to the elderly of the Bismarck/Mandan region. 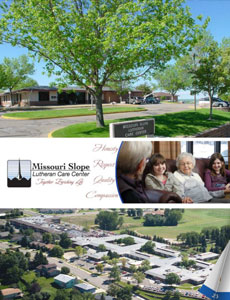