The city of San Angelo, Texas, is located in the west-central part of the state and has a population of about 100,000. The area was first settled by European-Americans in 1867, when thousands of migrants began moving west after the Civil War. To protect these new homesteaders, the federal government established a series of forts, one of which was Fort Concho, located at the confluence of the North, Middle, and South forks of the Concho River.

Almost as soon as the first Army units arrived, a small village called Santa Angela came to life nearby, grew into a community and ultimately became a center of trade for the surrounding ranchers and farmers. Fort Concho was abandoned in 1889, but the renamed city of San Angelo continued to grow into the 19th century and beyond. The military returned during World War II, when the Army Air Corps established a training base there. Today, Goodfellow Air Force Base, the area’s largest employer, still provides military intelligence training and a firefighting school for the Air Force, Army, Navy, and Marines.

San Angelo also serves as the trade and services hub for a 13- county area. Its proximity to the oil and gas fields of West Texas has made it a home to many oilfield service companies. A thriving medical sector has grown from its formative days in the early 1900s, when the city’s warm and dry climate helped heal tuberculosis patients who had come from all over the nation to its local treatment center. Other important sectors of the city’s modern economy are agriculture, livestock, meat processing, light manufacturing, telecommunications, business and health services, and education. Angelo State University, founded in 1928, is one of the nation’s premier, regional universities.

While San Angelo is blessed with a vibrant business environment, like many American cities of comparable size and age, it also faces many challenges in keeping its infrastructure intact and operable for the benefit of its citizens and corporate residents. The responsibility for that task is, naturally, in the hands of San Angelo’s city government, and most especially in those of the engineers, department heads, directors, and workers of the city’s various public works divisions and departments.

Bill Riley is the Director of Water Utilities for San Angelo. He oversees the eight divisions that make up the city’s water department. His mandate includes producing high-quality drinking water for the city’s residents and businesses. He talks about recent events and how his department is meeting its current challenges:
“Texas, for the last couple of years, has had a pretty severe drought,” he begins. “This year, most of Texas was able to come out of that drought with about 85 percent of our reservoirs filling up. San Angelo has, historically, relied solely on surface water supplies that have been dwindling for some time. This year, even during the rain, very little has changed in the reservoirs San Angelo relies on. They are less than 13-percent capacity, still.”

Riley relates that the city initiated a $120 million groundwater development project back in 2010, and now that it is completed, it is capable of yielding about 8 million gallons a day of groundwater for the city. “Unfortunately,” he says, “that won’t meet the city’s daily demand if the surface water supplies continue to decline. So we’re continuing to explore additional water resources, both in the short term and for the long term.”

Riley continues: “One of the projects the city is exploring right now is a direct potable reuse project, where we will reclaim the effluent from the wastewater treatment facility and run that through an advanced treatment process and put it right back into the drinking water supply.” That project has an estimated cost of about $136 million. “Couple that with a very aging infrastructure in our pipes – both water and wastewater – and we have somewhere in the neighborhood of $200 million worth of need in infrastructure rehabilitation,” he adds.
Riley admits that all of that work cannot be done and paid for at one time, but hopes that at least $50 million can be funded and spent over the next few years. He applauds the community’s necessary embrace of water conservation, but notes that along with that commendable behavior comes a concomitant reduction in the department’s revenue and, thus, a need to raise water rates to make up for the shortfall. “That’s a lot of burden on our 100,000 population,” he laments, “but we had to restructure our rates to meet that future need. We just went through that process, so hopefully, we can fund those needs with our current rate structure.”

Shane Kelton is the city’s Operations Director. His Department oversees the city’s fleet of vehicles, the maintenance of its lakes, its stormwater and drainage systems, its traffic signals and street lighting, and all of its streets and bridges. The challenges are many:
“From a street and bridge aspect,” he reports, “our infrastructure has suffered the same fate as it has across the country, and has continued to deteriorate to a point that it has become a serious issue. Our City Council has recently taken the initiative to start to address these concerns, not only with water and sewer, but with our streets. We have just completed a comprehensive street analysis and now have a baseline for all of our roads within the city – so we know where we’re starting from. And through that process, we’ve identified a plan to address some of our major arterials and collectors in town and start dealing with the deteriorating infrastructure issues that we have.”

Where will the money come to meet this challenge? “Council has recently given staff direction to move forward with a plan to fund the $80 million project with Certificates of Obligation, over the next 10 years,” Kelton explains. “And we are currently still looking for other funding sources to increase that, as well. Luckily, within our existing ad valorem tax structure, we do have the capacity to cover this $80 million bond over 10 years. Anything additional to that, we would be looking at an increase in property tax rates.”

Carl White is San Angelo’s Parks and Recreation Director, tasked with managing the city’s parks and playgrounds; its two recreation centers; its sports and aquatic venues; its convention center; its performing arts venues; Fort Concho, the city-owned and -operated National Historic Landmark; and Fairmount Cemetery, the final resting place of San Angeloans since 1893. His department’s capital projects budget has been subsidized by a half-cent increase in the local sales tax that was voted in by the public some years ago.

“And that has provided funds for major projects such as a large sports facility, renovations to different facilities like the Coliseum and Convention Center, some work at Fort Concho, and some park development projects,” White says. The Department’s to-do list comes from a master plan, based on public surveys and meetings, which gets updated every five years. “The master plan guides us in terms of new park projects or developments,” he says. “So what we build is what the public has told us they want.” According to White, additional funding to meet his challenges comes from the city’s general fund, federal Community Development Block Grants, and some local and state grants.

Russell Pehl is the City Engineer. When all of the other city departments decide upon which capital projects they want to develop or have constructed, Engineering Services has to implement and manage them all. His challenge is less monetary and much more organizational:
For example, Pehl’s division has to coordinate the efforts of the street reconstruction project so any old water and sewer mains below the streets targeted for demolition get replaced as they become unearthed, but before the new thoroughfares are laid down. “With all these projects going on, it has definitely increased the amount of work load for engineering; all the planning that we have to do to try and facilitate and get this work done,” says Pehl. “So we’ve started outsourcing a lot of our engineering, whereas before, we did a lot of it in house.”

Regardless of the amount of work that needs to be done, or the challenges before them, Kelton, for one is eager to get going. “It’s exciting from a staff’s perspective,” he says, “because some of us – those who have been here awhile – we’ve been banging our heads on the wall for a long time, knowing all these problems and issues were getting worse and worse. But now we feel that the citizens, the Council, staff – we’re all finally getting in a straight line to march in the same direction and we’re starting to accomplish things. And for the first time, as long as I can remember, we are actively engaged in trying to fix our broken infrastructure. And we have a plan. And that’s neat.”

Ricky Dickson is the Executive Director of Public Works. His office oversees and coordinates all the work of the three Department’s most responsible for San Angelo’s municipal infrastructure: Pehl’s Engineering, Riley’s Water Utilities, and Kelton’s Operations. A life-long resident of the city he now serves, Dickson believes San Angelo’s challenges are no different from those of most cities, and he agrees with Kelton they will be met with “a coordinated effort.”

But Dickson also is quick to add that San Angelo should not be thought of merely as a city that has challenges and problems, but rather one that should be celebrated for its vastly more important and longer-lasting virtues. “It’s not the issues of infrastructure – everybody has those problems,” he states. “We want people to know that this is a wonderful place to live, a great place to work, and a great place to raise a family. I think that’s a critical part of our story.”
And so it is.

WHO: San Angelo Texas
WHAT: A city of 100,000
WHERE: Located in the Concho Valley in central west Texas
WEBSITE: www.cosatx.us

Carollo Engineers – Carollo Engineers is an environmental engineering firm specializing in the planning, design, and construction management of water and wastewater facilities for municipal and public sector clients in the United States. The firm is headquartered in Walnut Creek, California, and currently maintains 38 offices throughout the United States. The company’s projects include pilot and treatment studies, pump stations, pipelines, solids handling facilities, and reservoirs. – www.carollo.com 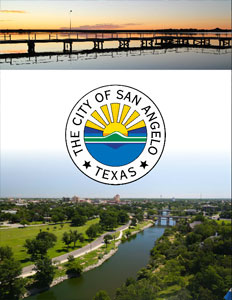