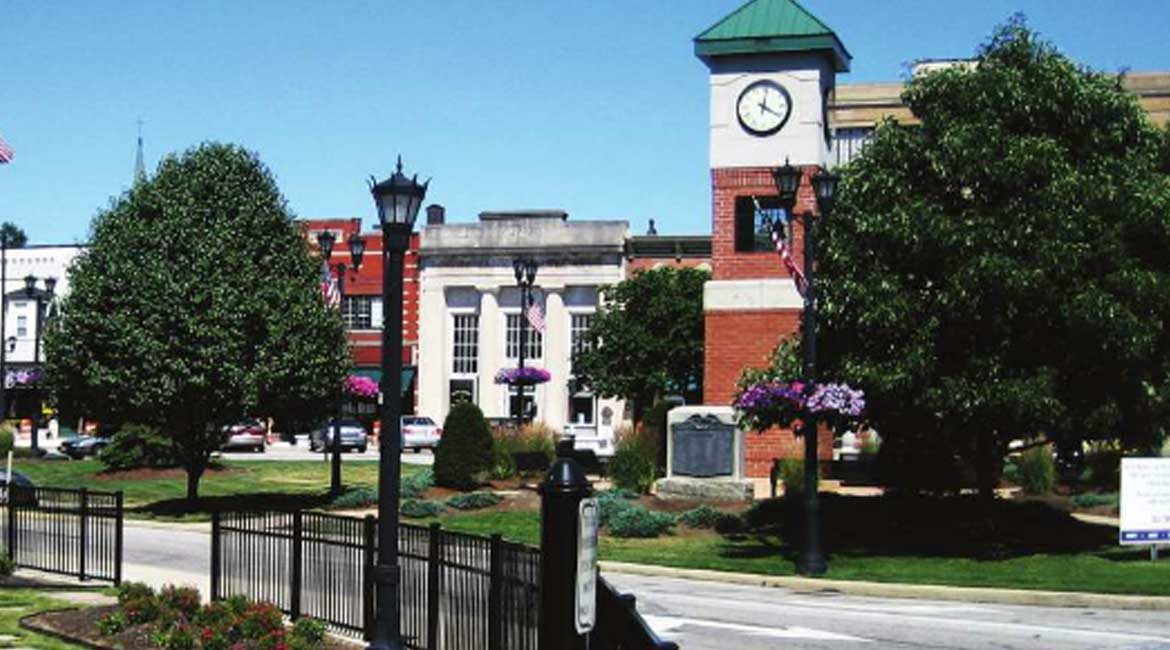 It is said that the town of Berea, a city of 19,000 souls in Cuyahoga County, Ohio, got its name by the flip of a coin, back in 1836. In one version of the tale, the Reverend Henry O. Sheldon, a circuit rider, and later the town’s first postmaster, had suggested two possible names for the small community due west of Cleveland: Berea and Tabor. As the story goes, John Baldwin, an educator from New England who had moved to the area in 1828, called heads. So, Berea it was.

In addition to founding the Baldwin Institute in 1846, which later became Baldwin Wallace College, this somewhat unconventional but multi-talented man was also largely responsible for the town’s early prosperity. Another story goes that one day, while walking home, Baldwin impulsively took a new route across the river on his farm and noticed a grouping of exposed rock on its banks. And that was the beginning of the successful Berea quarrying industry that began in the 1840s and lasted for another hundred years.

Baldwin surmised that the sandstone he espied would be suitable for grindstones for the sharpening of tools for farms, homes, and industry. So, he invented a lathe that cut slabs of sandstone into grindstones and shipped them to Cleveland by ox cart. Later on, he built a spur railroad line to connect his quarries to the Big Four Railroad that ran between Cleveland and Cincinnati. In time, Berea grindstones became world famous and building stone from Berea quarries were used in prestigious buildings in the United States and abroad. But Berea’s fame as the “Grindstone Capital of the World” ended in the early 1940s, as concrete began replacing building stones and carborundum grinding wheels replaced grindstones.

Today, Berea is moving forward to revitalize its economic future. Matt Madzy is the town’s Director of Economic Development. His department’s mission is to help local businesses thrive and grow, and one of its initiatives is connecting businesses with the resources that best fit their needs. To help achieve that goal, the City of Berea has partnered with Baldwin Wallace University and, a few years ago, the town and the school came up with two programs that are currently providing some of the community’s small and medium-size businesses with needed services, while simultaneously giving students real-world experiences outside of their classrooms.

“The idea was that businesses that were interested in sustainability concepts, techniques, or practices, and wanted to institute policy changes, didn’t know what policy changes to institute,” Madzy begins. “So we partnered with the Sustainability Clinic at Baldwin Wallace to match businesses up with the University, and the students, under the direction of Dr. David Krueger, can do reviews, dumpster dives, and analyses of what the businesses are doing, and try to come up with different concepts that help them become more sustainable. And if the businesses qualify for our grant, we can reimburse them close to one hundred percent of the cost of the consulting services.”

“The Sustainability Clinic has provided consulting services for local businesses to do small projects that focus on energy efficiency, waste reduction, or on sustainable products and services,” Dr. Krueger explains. “We’re finishing up a project, right now, with a small coatings factory in the AkzoNobel Company (a Dutch multinational company, active in the fields of decorative paints, performance coatings, and specialty chemicals). We’re finding some pretty significant, low-cost and no-cost opportunities for them to get their waste out of the waste stream. One example is that their largest waste product is wooden pallets. They have tons of these wooden pallets stacked behind their facility and would pay someone to haul them away. Well, it wasn’t hard for us to identify a local company that would take them away for free or at very little cost. That company re-purposes these pallets into mulch. So, we’re closing the loop there.”

“And when my student consultants find those opportunities, it’s pretty rewarding for them,” he adds. “We’ve always prided ourself on trying to be practical and applied. So, we’re always looking for programs like Matt’s, where our students can roll up their sleeves and learn what it’s really like to produce results that are meaningful for business.”

Tim Marshall is the Director of the Digital Marketing Clinic, which is part of the School of Business at Baldwin Wallace University. “We have a similar arrangement with the City of Berea through a grant program with Matt and his team,” he says. “Businesses that are based within Berea can apply for a reimbursement grant through Matt’s office that would pay for the cost of our Digital Marketing Clinical services.

“The Clinic is an experiential learning program that has a two-pronged mission. We provide additional experiential and hands-on learning opportunities for our business students so they can stand out in the job market, and the second part of our mission is to help local business thrive in the marketplace. We do that by matching teams of very skilled marketing majors, public relations majors, graphic design majors, with local businesses who, over the course of the semester, receive marketing communications support, as well as actionable, comprehensive, digital marketing communications strategy that can help a local business or organization tackle some of its real-world business objectives.”

“These are predominantly small and mid-size businesses, many of which are private,” says Krueger. “And the expertise that both of our programs bring to the table often flies under the radar screen for small and mid-size businesses; they don’t have enough staff on hand to tackle digital marketing, for instance, or even to think about sustainability. So, it’s a good way for us to provide a service that, otherwise, they just wouldn’t be able to afford, or don’t have the time and talent to think about.”

“And it’s a great opportunity to give our students more experience,” Marshall adds. “But we think it goes a little bit deeper than just an out-of-the-classroom experience and simply offering a resource of the University’s residents. We’re really building community, here. Students get a connection to the broader, off-campus community that they wouldn’t have had. We can talk about sustainability management or digital marketing in class all day long, but to give students the opportunity to interact with external stakeholders is rare. You can’t teach that. It really complements their academic experience. They can build roots here in Berea, while, at the same time, making themselves marketable for great jobs, once they graduate. And, again, we’re offering a service that, generally, our clients can’t access any other way.”

Madzy agrees that there is an added virtue in having students from the University interact with local businesses. “Our goal is to work with the students in the University programs, get them ingrained in our business community and then, hopefully, retain them as residents; take the students that are here and give them an opportunity to stay,” he says.

In addition to supporting local businesses already in Berea, Madzy’s office also works to attract new ones. “We have a strong relationship with the state as far as outside businesses that want to come to Ohio,” he relates. “There’s a Department of Development within the state government and leads that come to the state government are filtered down to the counties, and then down to the cities. I will frequently get emails and calls from the local division, here – the Greater Cleveland Partnership – talking about businesses that are interested in coming to the area and asking what we have available. So, I can explain about the programs that we have with Baldwin Wallace University. But additionally, we’ve also built up a relationship on the local level with commercial brokers that represent different clients who may be looking to open a second location, or get warehouse space to supplement their manufacturing space, or get space closer to their existing customers. So, any opportunities we get to go to a brokers’ event, we always seize that opportunity to explain to them what we have to offer here in Berea.”

“Matt and his team are so pro-active when it comes to communicating with current businesses that are based here and reaching out to businesses that might want to move here,” says Marshall. “He holds quarterly Business Development Seminars to help businesses reach their goals, or tackle a specific issue. They show that Berea is an attractive place to set up business and that once you’re here, there are a lot of ongoing programs that can help you sustain the business, as well.”

Another one of Madzy’s initiatives concerns the redevelopment of an industrial area in the northern end of the city. “It’s about 30 acres that had been an ‘Automile,” he explains. “It’s close to Cleveland/Hopkins International Airport and there’s a large exhibition hall, the I-X Center. The automobile dealerships have moved closer to the Interstate, so the city has been able to buy properties in the area and we’re beginning the process of marketing that out to different developers. That’s going to be our next, large economic growth area. The plan is to continue to work with businesses, to build additional buildings, or to expand to additional properties – leveraging the assets that are here and being innovative and proactive.”

WHO: Berea Ohio
WHAT: A town of 19,000
WHERE: In Cuyahoga County, about 17 miles southwest of Cleveland
WEBSITE: www.cityofberea.org 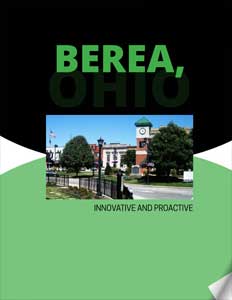