Bringing families back together

Mike Mooslin, President of Color Me Mine, the market leader in the paint-your-own-pottery (PYOP) industry, fondly remembers the time when, admittedly without much artistic talent, he made a ceramic gift for his ten year-old grandson at a Color Me Mine studio – a soccer ball candy jar. “It was easy enough to paint,” he says, “because it was already defined with these little hexagon shapes that I could paint black where they needed to be. Then I left an empty white space and I did a stick figure of an old man with a few hairs on his head, a big nose, and his hands sticking way out. And underneath, I just put in my own writing: ‘Your Grandaddy loves you this much!’” Years later, Mooslin was reminded of the incident when he noticed that his grandson had packed that same soccer ball candy jar to take with him to college. “Now what is that worth?” he asks rhetorically.

So, according to this company COO, that is why the mission of the Color Me Mine national chain has less to do with artistic talent and much more to do with “family bonding, family entertainment, and family enrichment,” Mooslin says. “We’re a family entertainment/enrichment concept and ceramics is really just a vehicle. The mission is to make the creative process of ceramic painting affordable, fun, and accessible to everyone. Our motto is: ‘No Talent – No Problem,’ and our byline is: ‘The Art of Having Fun.’ In a Color Me Mine studio, everyone’s painting something different, but everyone’s talking and laughing and there’s that family bonding, combining a communal activity with individual expression – and that’s our mission.”

Color Me Mine may have been created in 1991, but ceramics, itself, is one of the most ancient crafts on the planet. Once humans discovered that clay could be dug up and formed into objects by first mixing it with water and then firing it, an industry was born. As early as 24,000 BC, animal and human figurines were made from clay and other materials, and then fired in kilns partially dug into the ground. Almost 10,000 years later, as settled communities were established, tiles were manufactured in Mesopotamia and India. The first use of functional pottery vessels for storing water and food is thought to be around 9000 or 10,000 BC.

Ceramic making became hugely popular in the United States during the early years of the 20th century, as successive waves of immigrant artisans brought their ceramic making skills to these shores. According to Mooslin, over the first half of the century, there were tens of thousands of traditional ceramic studios throughout the country where people would get to together for classes and workshops. Many people, including his own grandparents, had kilns in their garages. “In the fifties and sixties, it became somewhat of a fad with people forming clubs,” he adds.

How the traditional ceramic studio evolved into a more contemporary concept is largely due to Robin Monroe and Josh Culver, a married couple who wanted to make their own ceramic wall sconces for their home. Mooslin picks up the story: “They went to one of these traditional studios and made them from scratch. They found it a little bit daunting; it took some talent to do. But when they got to the bisque stage, when all they had to do was decorate them with under glazes, it was so much fun and no matter what they did it came out looking beautiful. So they said ‘Wouldn’t it be great to have a business for families that didn’t require any talent, where we would supply them all of the blank bisque? They could pick whatever piece they want from figurines to dishes, to children’s items to house ware items, and they could paint it any way they want. We’d fire it and they’d come back and pick it up.’ And that was the birth of the contemporary ceramics studio as opposed to the traditional ceramics studio,” says Mooslin. By 1990, there were only a couple of thousand of traditional studios left in the United States, while the contemporary studio concept started by Color Me Mine began gaining in popularity.

Today, there are approximately 1,000 PYOP businesses in America, but Color Me Mine is the only multi-state chain with 150 stores. The brand controls about 15 percent of the market in store count, but takes in about 30 percent of total revenue because its stores do more than twice the volume of its independent, non-branded competitors. But perfecting the Color Me Mine’s successful business model was something that Mooslin still had to figure out after his company, Koo Koo Roo Restaurants, bought Color Me Mine from Robin and Josh in 1994.

Koo Koo Roo began building stores, in some cases as an adjunct to one of its restaurants, and in others, as stand-alone entities. “They opened fine,” Mooslin remembers, “and then we started watching the sales go down. We couldn’t figure it out. Everything we assumed about it was wrong. We didn’t understand what we bought.” Around the same time, Koo Koo Roo was planning to sell itself to another restaurant chain – one that didn’t want to take on the Color Me Mine part of the business. Mooslin was tasked with getting rid of it the company some other way.

So he began to investigate why the stores weren’t clicking and what he came to realize was that this “perfect small franchise” was one that needed the intimate, community involvement of an owner. “It didn’t work in mixed use areas; it didn’t work in discount areas; it didn’t work in big-box centers,” he explains. “It worked in suburbs; it worked in communities where there were families.” So Mooslin decided to buy Color Me Mine, from Koo Koo Roo, himself, in 1995, and a few years later, he began franchising stores in earnest. “As soon as an owner who was involved in the schools, involved in the community got involved in the business, the sales turned around – instantly,” he states. “And we’ve never looked back. We’ve been a pure franchise company for the last 17 years.” (Pure franchising provides franchisees with a complete business format including license for a trade name, the product or service to be marketed, the physical plant, methods of operation, a marketing strategy plan, a quality control process, and so on.)

Mooslin discovered another significant facet of the Color Me Mine model a decade or so into his ownership of the business. “When the recession hit, we were worried,” he admits. “We’re a high ticket item. But an interesting thing happened: sales started climbing. I tried to figure out why and I realized that during the recession years, families weren’t traveling. They were doing ‘staycations.’ They were looking for entertainment close to home. And so, we were recipients of people who would have travelled for their entertainment, but were now looking for entertainment in their communities.

The down side for his business during that same time was that the banks weren’t lending, so his franchise leads began drying up. However, Mooslin also noticed that many stores were closing and that shopping centers were losing tenants. He decided the time was right to get some financing together which would allow him to start building some company stores at reduced rent prices in those now-empty venues. “We’ll get them running, then we’ll re-sell them as franchises,” he remembers thinking. “This worked so well, that we continue to do it, today,” he adds. “So, we always keep an inventory of company stores that are all available for sale. And every year, it’s a different mix of six to eight stores. So, we have two ways of franchising – one is to sell a pure franchise, or someone can buy one of our company stores that’s already going. And that has been a tremendous way to keep our growth going.”

Color Me Mine has maintained a steady opening rate of about ten to twelve stores a year for the last 15 years, even though the company does no advertising to solicit its franchisees – all store sales come from word-of-mouth or from people visiting a store. “Our target customer is also our target franchisee,” Mooslin says. “They come in, they fall in love with it and they say ‘I have to have one of these in my community.’” Almost 90 percent of Color Me Mine franchisees are women between the ages of 25 and 55. They generally are college educated, have children, and are active in their communities.

All franchisees benefit from Color Me Mine’s corporate strategies which help studio owners in their operations. First, the company applies rigorous modeling on the real estate and site selection and only goes after the very best locations. Then, it scientifically goes through the necessary demographic and population profiling, including reach and drive time and which co-tenants would be the most suitable at each venue. Also, according to Mooslin, Color Me Mine simply builds better stores than the competition: “The stores are nicer; the furniture is nicer. The look and feel is upscale, the inventory is larger, and the marketing programs are superior. And we have a proprietary system of inventory management and sell-through that lowers a franchisee’s costs and maximizes profits.”

Color Me Mine also has marketing partnerships with such giant corporations as Disney, Warner Brothers, Pixar, and Fox Entertainment – alliances that put it ahead of the competing PYOPs. “We’ll do a Tinker Bell party, or 101 Dalmatians party, or a Jungle Book party with the license rights to the intellectual property. So we have that kind of a partnership that an independent can’t do.”
What is most important to Mooslin is that Color Me Mine is filling an important cultural need that is no longer being satisfied as it once was. There was a time, not too long ago, he laments, when most families shared dinner together on a daily basis. Today, families tend to go in many different directions: moms and dads both work, children are texting to one another or playing something on their smart phones, and fast food has come to replace sit-down meals. And when families do get together to celebrate an event, Mooslin notes, it’s often at a restaurant. And that’s where Color Me Mine’s mission of bringing families together comes in: “There’s only one activity that I can think of that duplicates both the communal activity and the self-expression of going out to a restaurant – and that’s pottery painting,” says Mooslin. “It’s the only activity that duplicates that family dinner table, where the cell phones and computers and video games get put away and where you sit and you go ‘old school.’”

Old school values suit Mooslin just fine. And when they are combined with a modern business model and innovative leadership, it’s no wonder that Color Me Mine is, far and away, the leader in its field. “It’s just a wonderful, niche franchise,” Mooslin states. “And it’s something that is dramatically needed – to bring families back together.”
st.

WHO: Color Me Mine Enterprises Inc.
WHAT: The market leader in the paint-your-ownpottery (PYOP) industry
WHERE: Headquarters in Glendale, CA
WEBSITE: www.colormemine.com 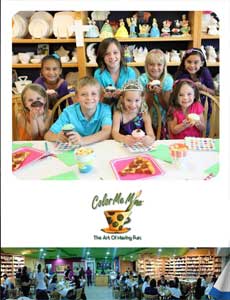