The National Retail Federation – The voice of retail

The Port District’s creation came after many years of effort by individuals and groups, most notably, the Peabody Coal Company, that wanted to see use the lower portion of the river used for commerce. “There was a non-profit set-up that lobbied the state to create a port, and it also lobbied the federal government to create a lock and dam,” says Ed Weilbacher, the Port District’s General Manager. In 1996, the U.S. Congress provided federal funds for making the lower 36 miles of the 325 mile-long Kaskaskia more navigable and for the construction of the Jerry F. Costello Lock and Dam where the river meets the Mississippi, just downstream of St. Louis, Missouri.

The river, itself, is maintained by the U.S. Army Corps of Engineers; the Kaskaskia Regional Port District is governed by a 15-member Board of Directors, appointed by the governor to fulfill its mandate, which Weilbacher puts, succinctly: “We facilitate economic development and we provide sites for development along the Kaskaskia River,” he states. “We have a unique partnership with the State of Illinois, which purchased the land along the river for 36 miles. There’s 20,000 acres of land that’s owned by the state. We’re able to request sites for development, when needed. We’re the only entity that can do that in this corridor – private opportunity comes through the Port. So, we serve as that mechanism for a private tenant to locate in a port location.”

The Port District oversees terminals at four locations, with a fifth just getting open for business. “We’re developing one at Fayetteville,” Weilbacher says. “That’s a 128-acre site at Mile 36 on the Kaskaskia River. We had envisioned a coal terminal there, but the coal market is not responding, so I don’t know if it will happen. If Peabody Coal was to expand it would be their number one location to do that. But, I don’t see that happening now with the current conditions. We’re close to Scott Air Force Base, so we see it maybe as a link to supply fuel to the base by barge and pipeline. But that’s a long-range plan. We also see it as a place to bring gravel and other aggregates up to that location for distribution, because they’re far from some quarries and this might be a good way to supply the market in that area.”

The next location, moving from north to south, is called KRPD1. It’s a 140-acre site at Mile 24.5 on the Kaskaskia, in New Athens, IL. Its outbound loading facility was built by Peabody Coal in 1977, which operated it until 1999. “It was the first site built for the Port.” says Weilbacher. “And through that location, we shipped about 60 million tons of coal over the years.” KRPD1, which connects with the Canadian National Railroad, is capable of handling 3,000 tons per hour of bulk material from rail or truck to barge. A new, in-bound, off-loading facility was recently built that consists of a barge equipped with a hydraulic trackhoe and conveyor that loads trains bound for the Midwest and beyond. A roll-off/roll-on ramp can handle oversized equipment.

“We’ve marketed our KRPD1 location for a couple of different things,” says Weilbacher. “We ran some grain through it for a few years and then it was idle for awhile. But a new power plant was built about 15 miles away from that location and they needed to supply it with limestone, for ‘scrubber stone.’ And so, we turned that into an inbound facility instead of an outbound facility and added conveyors and storage sites for the stone. Now, we offload it at that location and put it in our rail, and then railroad it to the power plant. We ship about 800,000 tons and keep 30,000 trucks off the road. We look at that facility as a way to maybe serve other markets where we can either go inbound or outbound with commodities.”

The next location is KRPD2 at Mile 18. Also known as the Stanley L. Reeble Dock and Industrial Park, KRPD2 is another multi-modal river, rail, and road facility for steel, general cargo, and bulk products, connected to the Canadian Pacific Railroad. The terminal includes a 50-ton overhead electric crane and a 30,000 square-foot, temperature and humidity-controlled warehouse. Barge inbound handling includes steel, fertilizer, and palletized goods. A new outbound conveyor was installed in 2015, and an eight-inch waterline was installed in 2016. The facility is operated and serviced by the Southern Illinois Transfer Co.

“We have a mix of companies located there,” says Weilbacher. “We have a plant there, called The Material Works, and they process coiled steel. They bring in steel either by water, rail, or truck; they stretch it and clean it; they cut it to blanks; and then they ship it back out again. They employ about 90 people in three shifts. The Gateway FS Company has five different counties that they service. They just recently expanded their facility to be an automated, dry fertilizer distribution center that’s going to serve a large market. It’s probably the most efficient distributor of fertilizer in a fifty-to-hundred-mile radius. They completed that structure, this past spring and they’re still expanding – they’re going to build a liquid fertilizer distribution in that location, too. They’re going to bring in bulk commodities, add value to it, and ship it back out again to service farmers. Our third company, there, is Kaskaskia Shipyard, and they’re starting to build towboats. They anticipate building two a year.”

The Evansville Grain Terminal at Mile 10 is both a grain export facility and a marina. Its “River House” terminal receives truck shipments of wheat, corn, and soybeans from elevators operated by Gateway FS through the area and directly from area farms. This facility is capable of loading 350,000 bushels per day. “They ship about 320 barges or more a year out of that facility,” Weilbacher reports.

Finally, on the Mississippi River, at Mile 125.5, the Port District has the Kellogg Dock – a lock-free site for downstream bound tows. “The Kellogg Dock was originally owned by the Consolidated Coal Company,” says Weilbacher, “and we purchased it and used it as an outbound coal facility. It’s operated by Kinder Morgan. Currently, we’re not shipping anything through that facility because of the coal market, but we do have a presence on the Mississippi River.” The dock also has a 300 rail car yard with service provided by the Union Pacific Railroad.

Across all of its terminals, the Kaskaskia Regional Port District ships a total of 1.4 million tons a year on the Kaskaskia River, making it an important part of the area’s economic life. And Weilbacher wants to see it continue to grow. “We have companies in Redbud that currently ship containers, all by truck to rail, and there’s movement within the industry to do containers by barge,” he says. “One company ships 700 or more containers a year, outbound, and we think some of that could go by water. And there are other companies that could go containerized outbound cargo, so we have an opportunity to do that.”

For anyone wondering whether or not it pays to do business with the Kaskaskia Regional Port District, Weilbacher eagerly touts its advantages: “We’ve got great access in river, road, and rail. We’ve got multiple terminals that meet geographic or specific product need. We have great partnerships; we work closely with our agencies; and we have a great workforce in the region.”
And that’s the essence of “Moving Up and Shipping Out.”

WHO: The Kaskaskia Regional Port District
WHAT: A regional port authority created by the Illinois State Legislature
WHERE: :Southwest Illinois
WEBSITE: www.kaskaskiaport.com

The National Retail Federation – The voice of retail 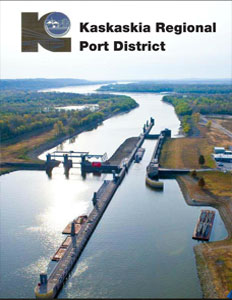