According to Peggy Daidakis, Executive Director of the Baltimore Convention Center, in 1979, when the facility was first built, the convention center industry was still fairly new. “Arenas often doubled as convention facilities and venues for trade shows and political events, and hotels did more of the gatherings of social, fraternal, and educational associations,” she says. “But the trade show business was really starting to find its niche in the commerce of face-to-face business – the traveling salesman was now going to trade shows to sell their services and wares.”

Thus, cities that wanted to capitalize on the economic impact produced by this growing cohort of out-of-town folks staying in their hotels, eating in their restaurants, attending their events, and buying their souvenirs, realized that they needed venues that were more accommodating to hold trade shows for meetings and other face-to-face activities. “So, our Mayor, William Donald Schaefer, and [Maryland] Governor, Marvin Mandel, were very forward thinking and said, ‘Let’s look at the opportunity of building a convention center,’” Daidakis reports. “And that’s what they did. They showed that bringing in out-of-towners would grow the economy in the city and state.”

As a result, the original Baltimore Convention Center building was financed with a combination of state bonds and city funds. It had 115,000 square feet of exhibit space and 40,000 square feet of meeting rooms. “In those days, that was a medium-size facility and we could handle 85 percent of the events that needed space of that type,” Daidakis says. “Then we started to see that we were not able to grow the business, because we had reached capacity. A study was done, and it showed that we could support tripling the size of the Convention Center.”

The reason for that study’s optimistic conclusion was because by the time the Convention Center opened, Baltimore was already going through a period of intense redevelopment. The city’s waterfront and historic seaport, known as the Inner Harbor, was transforming itself with the addition of parks, plazas, office buildings, hotels, and retail shops. Tourist attractions, such as the National Aquarium and the Maryland Science Center, came onboard. Harborplace, a sprawling, festival marketplace opened in 1980 and Baltimore, itself, was becoming a major tourist destination. “All of this was starting to draw visitors,” Daidakis concurs. “The Inner Harbor was blossoming into a new attraction and we saw a need for our convention and trade show business to grow, as well.”

So, in 1996, a $150 million overhaul of the Convention Center began that included a renovation of the existing building and the addition of a lot more space. “We tripled the size of the facility to be 300,000 square feet of exhibit space and about 80,000 square feet of meeting rooms,” Daidakis reports. “And we added a ballroom because food and beverage service was another opportunity for folks to stay in the convention center and have social gatherings, as well. Today’s facility is a modern structure made of glass and steel that gets flooded by natural sunlight. In addition, we have a unique outdoor space, a 27,000 sq. ft. outdoor terrace that is equipped with a drought resistant vegetative roofing pavilion, and a rain water recapturing system. The terrace also has another garden that is used by our executive chef for various specialty dishes and cocktails.”

As Baltimore continues to re-define itself as a world-class city, the Convention Center is trying to envision its own next stage of development. “Now, we’re looking at the potential of seeing if there’s a need to grow again,” says Daidakis. “There’s a lot of competition in our business and we need to continue to look forward to see if there’s anything we can do to advance our position in the city.”

Regarding its competition, Daidakis reveals that Philadelphia is the Center’s closest competitor. “And they’re double our size,” she says ruefully. “Washington D.C. built a whole new building that’s double our size. Even Nashville has a brand new building that is starting to attract some of the same business we are. It doesn’t mean that we still can’t hold multiple events and large events, but it does mean that we have to look at opportunities to see what we can do to improve what we have, either in size or services, to accommodate the new generation of conventions and trade shows.”

In pursuit of that goal, Daidakis says that the City of Baltimore, the Maryland Stadium Authority, and other vested civic entities have requested a conceptual design and engineering study to further examine the next steps for the Baltimore Convention Center to ensure that it is meeting the needs of its clients and keeping pace with industry developments. “Is it space; is it something else?” she asks, rhetorically. “We want to know is the Center big enough and if it’s not, then, what would it take to capture that next level of business, or to hold onto what we have, because some events are growing and are we going to have some events say, ‘We love Baltimore, but we can’t be there anymore because our programs have changed or grown?’”

Meanwhile, the Baltimore Convention Center does have its advantages: it’s easily accessible via road, rail, and air; it’s located right next to the Inner Harbor and across the road from Camden Yards, the Baltimore Orioles ballpark; and it’s close to restaurants, museums, and other attractions. “What we call the ‘tight package’ of things to do and see when you’re not in the facility,” says Daidakis. And, perhaps, most important, there are thousands of hotel rooms within walking distance. “We have a very good situation with hotel rooms,” she adds. “Connected to the facility we have about 1,500 committable rooms. And once you start branching out a little bit, we can commit up to 5,000 rooms within either a short walk or a short commute. Most of our conventions don’t have to engage a shuttle bus service because of the accessibility from a variety of hotels; we are a very walkable city. We partner with Visit Baltimore – they’re our lead sales and marketing team. Our teams work closely together, along with other industry partners, hotels, and attractions to market Baltimore as a destination for meetings and conventions.”

And though Daidakis admits that the last renovation took place 20 years ago, improvements have been made to the physical plant, over time. And, in fact, some of those improvements were achieved without having to pay for them. For example, Rob Parker, the Director of Building Services, explains that, in 2013, the Center entered into a “guaranteed energy and cost avoidance” project with Constellation Energy, the facility’s electricity provider.

“That project consisted of a ten million dollar upgrade in energy conservation measures, including LED and induction lights throughout the facility, the replacement of all of our toilets and urinals with low-flow fixtures, and various HVAC temperature controls,” Parker says. “The guaranteed savings from those projects was a little over a million dollars; we keep budgeting what we would budget normally and the savings pays for the upgrades to the facility. So, we get about ten million dollars worth of infrastructure upgrades and there’s no capital outlay for us. And those savings represent about a 20 percent reduction in our energy consumption and about a 15 percent reduction in our water consumption. That’s one way in which we’re trying to upgrade the facility without having to lay out cash, which is unavailable to us.”

According to Director of Client Services, Mac Campbell, the Center also pursues several other sustainable or “green” practices. In addition to recycling its paper, pallets, bottles, and such via Single Stream Recycling, the facility has a self-contained, self-cleaning pulper that turns solid food and cardboard waste materials into compost. “We had the first onsite, organic dehydrator in the country in terms of convention centers,” he asserts. The recycled material is used to fertilize the Center’s green roof gardens and surrounding landscape.

Campbell says that the Center has also found ways to recycle other useable materials back into the greater Baltimore area. “One of the great things about conventions is that they leave all kinds of random stuff, and each show has a different dossier of items they might leave behind,” he states. “Through our Donation by Diversion Program, we are able to donate items left by exhibitors to local not-for-profit organizations. These items that range from reusable bags to furniture get diverted from local landfills to the benefit of our community.”

While the Center’s management ponders the possibilities of future growth, Daidakis believes that the facility’s many attributes, including its prime location in an exciting metropolis, its commitment to the local community, and its reputation for superior service to its clients, will continue to ensure that its exhibit halls and meeting rooms remain filled. “We listen to our customers; we pay attention and prioritize their needs,” she states. “We have a staff that is service-oriented with a can-do attitude and service partners who look for ways to enhance the customer experience in the facility and in Baltimore.”

And that’s why the Baltimore Convention Center is still the premier location for conventions, tradeshows, and expositions in the Mid-Atlantic region.

WHO: The Baltimore Convention Center
WHAT: A premier location for conventions and tradeshows in the Mid-Atlantic region
WHERE: :Baltimore, Maryland
WEBSITE: www.bccenter.org

Projection Presentation Technology – Projection Presentation Technology is a comprehensive provider of audiovisual and related services providing innovative solutions for meetings, presentations, and conventions. Headquartered in Washington, D.C., the company was founded in 1971 by David Campbell. Since then, it has expanded to 15 cities across the country, with in-house audiovisual operations in 13 convention centers, nationwide. – www.projection.com 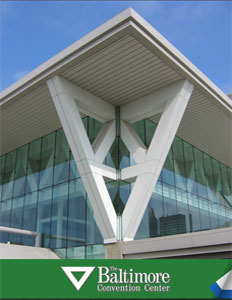