If ever it became necessary to recount yet another example of how the American Dream operates, then the story of Sergey Kunin, President and CEO of IQ Dental, would certainly suffice to fit the bill. Kunin came to the U.S. from Russia in 1996, an émigré who spoke no English. He was lucky enough to get a job at Becker-Parkin Dental Supply Company in the receiving department even though he had no dental background. Within a decade, he was plucky enough to move up the ladder – receiving manager, purchaser, vice president for operations. “I believe anyone can do anything if he has the mind to do it,” Kunin says. “You put the effort into it and things will come.”

When Becker-Parkin was acquired by Henry Schein Dental in 2007, Kunin was the only executive taken along. With operations or affiliates in 33 countries, Henry Schein, Inc. is the world’s largest provider of health care products and services to office-based dental, animal health, and medical practitioners. Kunin relates that he worked very closely with his new corporate owners and continued to learn a great deal about the industry. Not bad for ten years in his adopted country.

Kunin left his new company after a few years and began looking for other employment. “When I left Henry Schein, I was not planning to open up any company,” he recounts. “I did not have this in mind. I was just looking for another place to work.” And yet the part of the American Dream that was yet to be fulfilled is the part where the intrepid individual, who has already achieved an inspiring measure of success, nonetheless decides to take a chance and strike out on his or her own – which is just what Kunin eventually did. His friends and family encouraged him: “’If somebody can do it, it’s you,’” Kunin remembers them saying. Somewhere along the way, he decided that searching out companies and going on interviews was not the direction in which he needed to go. “I said to myself, ‘why not do it?’ And this is how I opened the company.”

So, in February 2009, just as the U.S. economy was bottoming out, Kunin began his own firm with five employees – “Me, my wife and three others,” he says. The company also built and then had to fill a 7,000 square foot warehouse. For the first couple of years, IQ Dental didn’t do any advertising. Its business was promoted by word-of-mouth and buttressed by the client base that some of his employees brought with them when they came on board. Kunin’s original plan was to deal only in dental merchandise and not get into selling and servicing dental equipment. But he soon realized that to satisfy his customers, he had to offer more of those services. “Much of the time customers do not want to give you the full merchandise business if you cannot provide them with service, because otherwise, they need to go to another company,” he explains.

Today, IQ Dental employs over 45 people and operates out of a 36,000 square foot warehouse in Fairfield, New Jersey. It is supplied by over 400 vendors – virtually all U.S. distributors of dental supplies and about 60 percent of the country’s equipment manufacturers. Of the approximately 144,000 dentists in the U.S., IQ Dental has between 6,500 and 7,000 of them in its customer base. It operates mainly in the Northeast, U.S., but every quarter it sends marketing materials to some 40,000 single practitioners, group practices, and buying clubs across the country. It sells thousands of different dental supplies and pieces of dental office equipment.

IQ Dental also offers continuing education (CE) programs to its customers and is certified by the American Dental Association (ADA) to provide CE credits to professionals whose licenses require them. The company hosted its first educational forum in 2014, and this past September, it held its second with over 70 dentists, three speakers, and 25 vendor partners. It also offered a full-day course for CE credit.

Kunin says that IQ Dental is planning to add another 4,000 square feet to its Fairfield facility, giving it more space for an expanded sales team as well as classrooms for manufacturers who have approved CE courses, and who want to be able to teach them on site. The company just opened a new branch in Arizona in order to expand into the Southwest, and is hoping to launch another distribution center somewhere on the West coast within the next several years.
When Kunin first decided to create IQ Dental, he based his company’s model on the family-style organization he was so enamored with back at Becker-Parkin. That ethos, and the importance that Kunin places on all of his business relationships, is what informs his own company, today. “We are a family-based company and we operate as a family,” he says. “And we treat our vendor partners and our customers as our family. And because we are a family company – we treat everyone equally.”

And in the final evocation of the American Dream, IQ Dental also gives back to the community. It donates yearly to the National Children’s Oral Health Foundation’s “America’s ToothFairy Grant” Program which enables hundreds of at-risk children to receive oral health education, and preventative and treatment services. The company also helped sponsor a five-day, dental mission with Zion Care International to the island of Jamaica, where the nine-member dental team, which included two IQ Dental customers, treated over 600 patients.
The next time somebody suggests that the American Dream is no longer viable, all one has to do is retell the story of Sergey Kunin. That should put the matter to rest.

WHO: IQ Dental Supply
WHAT: A supplier and servicer of dental merchandise and equipment
WHERE: Headquarters in Fairfield, NJ
WEBSITE: www.iqdentalsupply.com

PREFERRED VENDORS
DentalEZ – DentalEZ produces dental operatory systems, including cabinets, patient chairs, and delivery equipment used in the dental office. The Den-Tal-Ez Manufacturing Company was founded in 1958 by Des Moines inventor John Naughton, who collaborated with Dr. John Anderson to develop his now-famous J-Chair. By allowing the dentist to sit next to a reclined patient, the chair greatly reduced the strain on the dentist’s neck and back while enhancing the comfort of the patient. The 100,000th J-Chair, once displayed at the Smithsonian Institution, now resides at the Dr. Samuel Harris National Museum of Dentistry in Baltimore. – www.dentalez.com 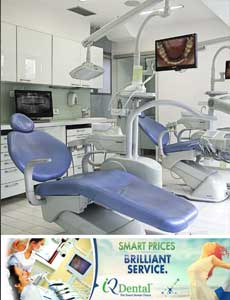