May 2016Past IssuesPublic Sector

Where great things are happening

Jim Bourey, the City Manager of Newport News, Virginia is aware that the City he administers has been around for a long, long time but it’s the City’s future he is most excited about. One of the eight original shires of Virginia, the metropolis of 180,000 sits on the banks of the James River, in the southeast corner of the Commonwealth, and was once part of Warwick County. Originally settled in the early 1600s, Newport News was a rural area of plantations and a small fishing village until after the Civil War, when construction of the railroad and the establishment of the Newport News Shipbuilding and Drydock Company founded by, Collis P. Huntington, began an era of growth and industrialization that continues to the present day. Growth and economic development is a key part of Bourey’s and the City’s agenda.

“Right now, Newport News Shipbuilding, a division of Huntington Ingalls Industries, is the only shipyard that builds nuclear aircraft carriers and half of our country’s nuclear submarines” says Bourey. The Shipyard, as it is called, has at least 21,000 employees plus navy and contract personnel. “So, at any one point in the day, there are 30,000 employees at the Shipyard which extends for two miles along the water, close to downtown. It is a bedrock industry that has existed in the city for over 130 years.”

1.7 million people live in seven, significant-sized cities, known as the Hampton Roads Region of Virginia. Newport News is the largest jurisdiction that sits on what is referred to as the “Peninsula” with Norfolk and Virginia Beach “across the river.” Bourey is confident to say, “we’re probably the strongest from a business perspective and, certainly, from a manufacturing perspective.” In addition to Newport News Shipbuilding, Newport News is headquarters for Canon Virginia, which has all the manufacturing operations for Canon in the U.S. and several thousand employees. Ferguson Enterprises, the largest plumbing wholesaler in North America, has operations worldwide with corporate offices and a newly built showroom in Newport News. The Continental Corporation, a German-based company builds automobile engine parts, has 500 employees and is expanding to 1,000 people. Other prominent Newport News companies which have recently expanded include Liebherr Mining Equipment, Printpack, Riverside Health Systems, and High Liner Seafood.

But while Newport News has had a very strong industrial base for well over a hundred years, Bourey is looking ahead to what he hopes will be the city’s new paradigm for economic development in the current century. “Our vision, going forward, is to move more and more towards knowledge-based industry and higher levels of manufacturing,” he explains, “and we’re doing that in a number of ways with investment in research and scientific exploration leading the charge.”

The Thomas Jefferson National Accelerator Facility (Jefferson Lab), a world-class national laboratory specializing in particle physics, is the best example of these scientific opportunities. Jefferson Lab employs at least seven to eight hundred people and also has another 1,200 scientists from around the world who come to research and study at any one point in time. Now, Newport News is gearing up to compete for a billion-dollar, high-energy electron ion collider (EIC) to explore a new frontier in physics research. Jefferson Lab in Newport News is one of two national laboratories vying for the project. The Department of Energy will decide where to put it. At a cost of about $1 billion to construct, it would have an economic impact over the first ten years of $4 billion, with an estimated 4,000 to 5,000 jobs. Bourey acknowledges, “it’s a pretty high-stakes project, and another driver of our knowledge-based economy going forward into the future. And we are positioning ourselves to be successful in this arena.”

The city is also working to develop a technology center adjacent to Jefferson Lab that will be a mixed-use development, combining retail and residential with one million square feet of research and office space. “That’s a major, key piece for us,” Bourey says. “It will increase our per capita wage, and increase the wealth in the community so that we can further invest. The Tech Center is a partnership with Virginia Tech University and the developer, W.M. Jordan. “It’s an opportunity for us to take that Jefferson Lab research and parlay that into businesses and technological applications that then can grow smaller and larger businesses.” Bourey expects the first building of research and office space will open next year. Apartments are under way and the very upscale retail center has already opened.

Another major project is Newport News City Center, a, 52-acre business district in the Oyster Point section of town. “The city is very long – some 26 miles or so – and the downtown was at the very far, southern end. “ Bourey explains. “So, the city developed a new downtown, if you will, including a large fountain area with a lake in the middle.” City Center features over a half-million square feet of Class-A office space, plus retail, restaurants, residential units, and a newly-remodeled, 256-room Marriott Hotel and Conference Center. “It’s an important piece, not very far from the technology center,” he adds. To date, many corporate headquarters, banking, insurance, and legal firms have relocated to City Center, as well as some of the city’s own government offices.
While Newport News is engaged in shepherding its community toward the future, it is not planning to leave any neighborhood behind. The city has been engaged in another major redevelopment project called Brooks Crossing, and will spend up to $20.3 million to help revitalize and redevelop the Southeast Community. “We started with public infrastructure by rebuilding a major street corridor,” says Bourey. “We also invested in a police precinct that just opened in January of this year. That was a major effort to provide a public facility that also made a statement about security in the area. We are working on a very unique arrangement for a grocery store opening in May of this year. The new store, Jim’s Local Market, was selected for its commitment to community engagement and healthy living. It will focus on fresh foods and will have a credit union, satellite location and, best of all, job training and hiring from within the community. There already has been a significant amount of interest in how we put the deal together to address an underserved area, and I think we’re going to see what we did be replicated in other places. “

Bourey continues to outline the city’s infrastructure agenda, touting a major project to improve transit. He’s excited about the prospects of working with a regional transit authority on a major corridor study that could provide up to a 25-mile spine of fixed guide-way throughout the city. While there is a light rail project in Virginia Beach, he expects the outcome for Newport News is going to be a rapid-bus, transit line, which would have a separate right-of-way with excellent speeds. “This could really transform transit for the region,” he exclaims. “It’s not only part of the strategy from a transportation perspective, but it’s also important for attracting and retaining a younger work force. It connects everything.”

The future may be top-of-mind for Jim Bourey, but he can’t help but touch upon a few more current successes in Newport News – ones that benefit residents and any interested newcomers. “There are a tremendous amount of community assets that are pretty amazing,” he says. “There’s Christopher Newport University –transformed under President Paul Trible. It now has more than 5,000 students and continues to soar in its rankings and quality of its students, and is home to the Ferguson Center for the Arts, which is a world-class venue. It’s a beautiful campus and it will continue to thrive. We have great museums, including one of the best Mariners’ Museums in the country, and frankly, one of the best in the world. We’ve got one of the largest municipal parks east of the Mississippi – Newport News Park celebrating its 50th anniversary, this year. And we also have a very significant airport – Newport News/Williamsburg Airport; it’s easy to use and very friendly to people and businesses.”

Cleder Jones, the Director of the City’s Communications Department, agrees. “Newport News is really a great place,” she declares. “We have great cultural amenities; we have a wonderful business climate; we are a place where people want to come to live and businesses want to come to do business.”
Newport News, Virginia may have a great place in history but its future is where the “great things are happening.”

WHO: Newport News, Virginia
WHAT: A city of 183,000
WHERE: : Southeast, Virginia on the James River
WEBSITE: www.nnva.gov 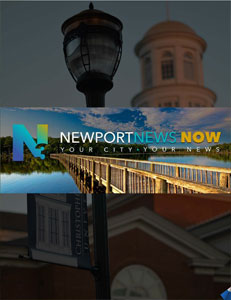