Serving the corn farmers of the midwest

“There’s always going to be farmers and there’s always going to be corn,” says Tyler Stroo, President of the Kankakee, Beaverville & Southern Railroad (KBSR), a small, family-owned, short line that traverses the cornfields between Interstate 57 in Illinois, and I65 in Indiana. Stroo’s great-uncle, Fey Orr, who had a lumber business and an agricultural products industry in Beaverville, started the railway in 1977, when Conrail planned to abandon 25 miles of their ex-New York Central Railroad trackage between Kankakee and Sheldon, Illinois.

“He was not in the railroad business,” says Stroo. “He was in the grain business. He owned an elevator that was on the tracks and when the railroad went bankrupt, his elevator had no way to ship his corn. So he decided to buy that little section of railroad from Aroma Park to Sheldon.” Over the ensuing years, several other sections of track in the area were being abandoned by the Class 1 railroads. “Opportunities came and he decided to buy,” Stroo continues. “This section went bankrupt, and then he bought this section. He got some low-interest loans from the State of Indiana to buy some of the lines. He pretty much winged it. He did what he had to do to get everything going and he learned on the fly.”

As the years went by, the KBSR became another one of Orr’s successful businesses. “My dad worked for him at an elevator,” says Stroo, “and as the railroad got bigger and bigger, he moved my dad down onto the railroad.” By the time Orr died in 1997, at age 85, the patched-together railway had grown to 155 owned and 166 operated miles of track. Today, its equipment includes six, 2000 HP locomotives and 284 covered hoppers.

“My dad took over for him when he passed away and then, my dad passed away in 2009. Now my brother and I run it. We have ten employees and that includes myself and my brother, Neil. I’m President and he’s Vice President, but we do everything together. We ride together to work every day; we start our jobs at seven o’clock in the morning at our shed at Iroquois Junction, Illinois and talk about what needs to be done.”

Essentially, the KBSR’s business model is very straightforward. “We ship corn,” says Stroo. “We lease 284 grain hoppers and we pick them up at interchanges from the bigger railroads.” KBSR connects to the CSXT, the Canadian National (CN), the Norfolk Southern (NS), the Union Pacific (UP), and the Toledo, Peoria & Western Railway (TPW), a regional carrier. “We’ll drop off cars at the private elevators that receive the corn from farmers. We have nine elevators on our line that are capable of loading cars. The elevator will load them, we’ll get a bill of lading of where they need to be shipped out to, and then we’ll pick them up and deliver them back to the bigger railroads. They’ll bring the loaded cars to wherever they need to go and they’ll be offloaded. Then they’ll bring the cars back and we’ll do it all over again.”

Stroo says that other than maintaining the railway’s tracks and machinery – jobs which they outsource – there are no further plans for expansion. “There’s not too much farther that we can go,” he explains. “We interchange with your basic Class 1 railroads and that’s pretty much as far as we can go. We plan, every year, to spend about a million dollars to keep the track up to snuff. We try to do ten miles every year. Once we get around to getting everything done, then we start all over again. It’s a never-ending battle.”

Regardless of the difficulties of keeping a short line railroad running, Stroo seems at ease with the KBSR’s relaxed work environment. “We work from about seven till about . . . it depends on how much you have to do for the day,” he says. “Sometimes it’s four, sometimes it’s two, sometimes we’ll only have a train, one day, till noon, and then we’ll go and do some track work or clean engines. And we don’t work Saturdays or Sundays, unless needed. Our busy time is, obviously, harvest, because that’s when the elevators are getting full, so we might work a Saturday here or there . . . but we’re ‘as needed.’ If it’s not needed then we try not to take the trains out, because then you’re burning money for no reason.”

Stroo also seems to prefer the KBSR’s small, tight-knit staff. Including the Stroo brothers, there are five other engineers and conductors, two “track guys,” and an office manager. Two student engineers were just brought on board who will be trained and certified. “We’re basically a small family,” Stroo says. “You’re working with the same guys every day. You know their kids; you know their wives; you know what they like to do. It’s actually pretty nice.”

So, as long as there are farmers, and as long as they grow corn in the cornfields of Illinois and Indiana, the Kankakee, Beaverville & Southern Railroad, a small, family-owned and operated short line, will be there to carry that corn to wherever it needs to go.

WHO: The Kankakee, Beaverville & Southern Railroad
WHAT: A short line railroad in Illinois and Indiana
WHERE: : Iroquois, Illinois
WEBSITE: www.kbsrailroad.com 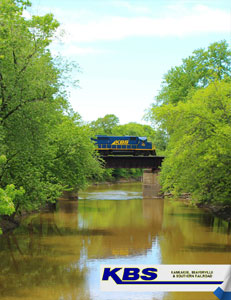