The Siegfried Group is a world leader in drug manufacturing

You can expect more from Siegfried, according to Marianne Späne, Executive Vice President & Head of Global Business Development of Siegfried AG. Siegfried has strategically transformed itself over the past five years to become a leading, worldwide contract development manufacturing partner (CDMO) to the chemical and pharmaceutical industry. Siegfried offers complete, integrated expertise in both drug substance formulation and drug product manufacturing, with a proprietary portfolio of controlled substances and APIs for use in pain and addiction. An internal leadership strategy known as “Transform” was put in place five years ago to establish an attractive position for Siegfried.

The Siegfried enterprise began in 1873, when it was founded as a “family company” by pharmacist Samuel Benoni Siegfried in Zofingen, Switzerland, the city which, to this day, remains the company’s world headquarters. The original company had only 12 employees; today, Siegfried has over 2,400 employees, across both the Eastern and Western hemispheres from the United States to Europe and China.

Späne explains that Siegfried has always been a company interested in growing both organically and by acquisition. “In 1927, the family saw the U.S. as a growing market which essentially led the company to begin operations in Carlstadt, New Jersey. Later on in 1937, Siegfried acquired the company and founded Ganes Chemical Works in Pennsville, New Jersey, where its headquarters was located” she says. In the early 1990s, Siegfried began leveraging its extensive experience and inherited know-how in both chemical development and pharmaceutical manufacturing, combining integrated value to customers with both drug substance custom development and drug product manufacturing.

In 2005, Siegfried decided to strengthen its own API product portfolio business through purchasing licenses of niche opiate-based controlled substances from Peneck Corporation, another New Jersey drug manufacturing site. Späne says this activity provided Siegfried a nice position to play a significant role in the highly regulated and controlled drug substance market. “Realize too that Peneck was at that time, one of only five licensed U.S. companies supplying controlled substances to this very highly regulated market.”

In 2007, Siegfried wanted to have its own finished tableting drug product manufacturing site; therefore, it embarked on the idea to launch a pharmaceutical production facility on the island of Malta, Spane says. “Malta is a small island south of Europe, and is considered a lower-cost country where the natives speak English, and, more beneficial to Siegfried, the island is within close proximity of our current development hub for drug product in the headquarters of Zofingen Switzerland.” The Malta site both completed Siegfried’s commercial production need and complimented the expertise in development of high value, generic drug product pharmaceuticals which were housed close by at the Zofingen, Switzerland site. Späne further explains that the Maltese facility helped make Siegfried more competitive in the solid, oral drug products market, manufacturing tablets and capsules. In fact, Siegfried was one of the first pharmaceutical plants to have set up shop on the island of Malta in the span of the preceding four or five years.

During the same time as the site resurrection of Malta, Siegfried also closely examined business segments within the organization that were not in line with the company’s increased focus on moving away from manufacturing its own products to become a full-fledged, integrated service partner to others. Sidroga and the biotechnology businesses were sold in 2007; the pharmaceutical production site at Zofingen was sold to Arena Pharmaceuticals in 2008; and, its PulmoJet subsidiary in Munich, Germany, a maker of a dry powder inhaler, was sold in 2010 to Sanofi-Aventis. “So, it was a clear strategy to transform Siegfried from a mixed provider of services under its own brand into a clear full-fledged service provider,” Späne affirms.

Much of Siegfried’s more recent, vast growth is a direct result of the aforesaid company strategy known as “Transform.” The Transform strategy was an initiative put in place in 2010 by Siegfried’s CEO, Dr. Rudolf Hanko, who was supported by Siegfried shareholders to put in place a financial basis to support “Transform” with an increase in share capital. Dr. Hanko’s aim with “Transform” was to combine the firm’s once, two separate divisions – drug product and drug substance – into one, while leveraging Siegfried’s inherited knowledge and extensive experience, to complete all the necessary elements that would position Siegfried as a leading CMO and preferred partner supporting the entire product life cycle for customers in both the chemical and pharmaceutical industries. (Drug substances by definition are the chemical syntheses of an active pharmaceutical ingredient, or API which are then formulated into a drug for treatment of humans; drug product is the finished formulation – the tablet, capsule, injection, etc., for safe treatment of humans). In order to strengthen its presence in both aforesaid markets and to be recognized as a leading, complete integrated service partner to the pharmaceutical industry, a string of acquisitions ensued.

“In 2012, in order to forward integrate with broader and more complex range in drug products, we identified ‘sterile fillings’ as an attractive business segment. Thus, we acquired a company in Irvine CA, called AMP with highly-sophisticated, sterile injectable capabilities and steriles for small scale product demand (Alliance Medical Products),” says Späne. Then in 2014, Siegfried bought the German company, Hameln Pharmaceuticals GmbH and Hameln RDS Gmbh, which created a more powerful network in the drug product, pharma space for Siegfried, as Hameln the sterile injectable offering provided the larger scale demand injectable solution. Having both companies on board, afforded Siegfried the ability to cover the entire injectable customer demand platform.

During the same year as the Hameln integration, Siegfried wanted to backward integrate as well. This would bring about major reduction in the factor costs for chemical production and allow the company to maintain a competitive edge in the drug substance pharmaceutical space. The core element to achieve this milestone was to add a brand new site in a lower cost-to-manufacture country such as China. Siegfried purchased land within a key industrial campus of China, Nantong, broke ground, and began building a state-of-the-art, fully cGMP facility. “We built our own site from ground up, in Nantong, to offer a lower cost option to support the emerging pharma market. Nantong is closely linked to various projects in our Zofingen plant that will commence operations late in 2015 and 2016 that have similar technical designs to the Nantong plant, making it easier for our company to transfer products between both sites.” Spane says.

There was, however, still one more major acquisition left for Siegfried to make within the “Transform” strategy. The Siegfried Company, this past fall, acquired significant segments of BASF’s fine chemicals business, purchasing part of their API and customer manufacturing pharmaceutical supply businesses, inheriting three production units: Minden, Germany; Saint-Vulbas, France; and Evionnaz, Switzerland. The acquisition represented the final, major step in Siegfried’s transformation process implemented over the last five years. The company now has nine sites spanning both the Eastern and Western hemispheres of the globe. “The final transform milestone of BASF gives us the leverage, critical size, and site mass now for us to be a very strategic CDMO partner to our big pharma clients,” says Späne.

Today, Siegfried serves a large, diversified customer landscape with clients ranging from mid-sized and emerging pharma company sizes, to the more gross pharmaceutical partners across the entire pharma sector. Siegfried develops and manufactures APIs for the research-based pharmaceutical industry, as well as providing development and production services for drugs in finished dosage forms. Siegfried has many relationships with suppliers that support them.

In a very competitive sector, Späne believes that Siegfried has significant advantages, not the least of which is the company’s inherited knowhow. “That’s the big benefit of Siegfried,” she states. “If you want to be a service provider you are in a better position if you have a broader portfolio of capabilities. We didn’t need to build up or to acquire a culture of how to do formulations or drug product manufacturing; we had the inherited knowledge and technical expertise grown up within Siegfried. And now, when we acquire companies, we already have the two divisions integrated as one. Therefore, it is much easier to integrate all our acquisitions that fit either within drug substance or drug product. Our major advantage is that we already have this integrated knowledge that helps us link both businesses together.”

Sandy Cerrick is Siegfried’s Vice President and Head of Global Marketing. She both confirms and broadens Späne’s account: “We have transformed ourselves into a complete, fully-integrated drug substance and drug product service partner,” she says. “We can provide not only the inherited knowledge that we have in both of those components of the pharmaceutical industry, but in addition, there are many niche technologies that we have many years of experience in, which further diversifies and broadens the offering. We are ‘a one-stop-shop,’ that can fully support our client’s value chain. It’s been a big step for Siegfried over the last five years.”

Späne adds that although there will surely be a new growth strategy sometime in the future – most likely including further acquisitions – for now, Siegfried’s focus is to get all of its newly acquired sites integrated into the Group – a process that should be completed within the next 12 months. Its marketing strategy includes making its value proposition to new potential customers who think they would benefit from Siegfried services, while simultaneously expanding the portfolio of existing customers that, as Späne, remarks, “have already seen the value of working together with Siegfried.”

Späne adds that although there will be a new growth strategy; Siegfried’s primary focus is to get all of its newly acquired sites integrated into the Group – a process that should be completed within the next 12 months. Its marketing strategy includes making its value proposition to new potential customers who it thinks would benefit from Siegfried services, while simultaneously expanding the portfolio of existing customers that, as Späne, remarks, “have already seen the value of working together with Siegfried.”
______________________________________
AT A GLANCE

WHO: The Siegfried Group
WHAT: A worldwide player in the field of drug substance and drug product manufacturing
WHERE: Headquarters in Zofingen, Switzerland
WEBSITE: www.siegfried.ch

Proconex – Founded over 65 years ago, Proconex is a leader in the process control and automation industry. It provides services to its customers in the chemical, power and energy, pharmaceutical, oil and gas, pulp and paper, life sciences, metal and glass, and food and beverage industries. Its services are designed to help its client companies improve performance – from planning, design and implementation, through operations, maintenance, and long-term sustainability. – www.proconexdirect.com
Tri State Steel Drum Corporation – www.tristatedrum.com 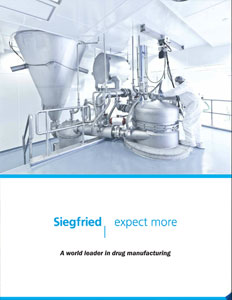